When you are stuck inside and the next holiday seems far away the best thing to do watch a movie and be transported to another place. Can you think of better way than to experience a destination you haven’t been without leaving your comfy couch?! Check out this list of top 15 movies that inspire travel… these are my favorite films that instantly transports you to places all over the world.. even if only for an hour or two.  It might get you inspired to pack your bag and plan that next trip! 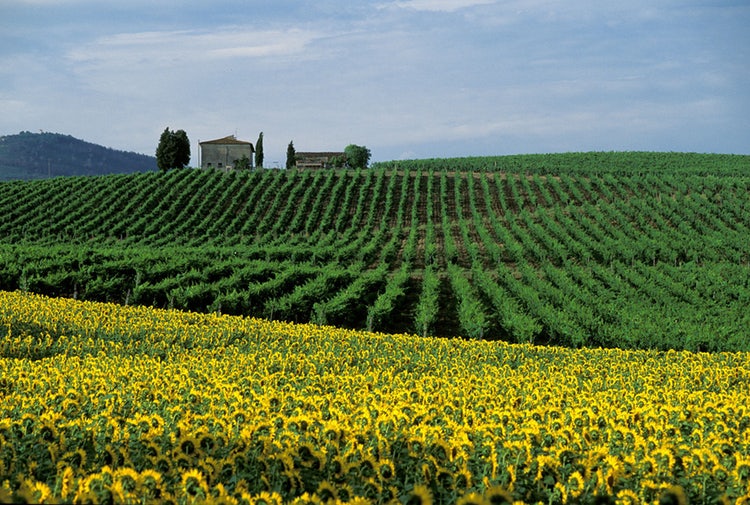 “Under the Tuscan Sun”, based on Frances Mayes’ memoir, shows a recently divorced American woman venturing off to Italy to buy and restore a villa in Tuscany. This is probably my all time favorite movie than inspired our first trip to Italy.  It had me dreaming of selling everything, packing our bags and buying a vineyard and living in a Italian village surrounded by sunflowers and cypress trees.  Sure enough I planned our very first trip to Tuscany after watching this movie and one of the first posts I wrote (cringe – will have to rewrite someday.. oh well!). 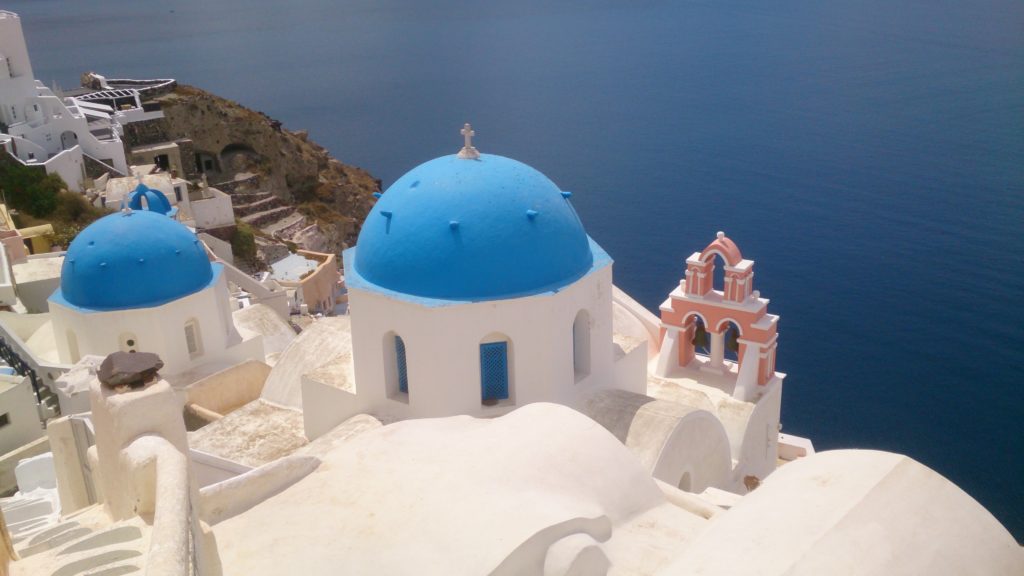 “Mamma Mia” created a tourism boom to the Greek Islands for destination weddings. You are sure to be mesmerized by the film’s spectacular scenery and tempted to book a trip to this Mediterranean paradise or even plan a Big Fat Greek Wedding of your own. Sure – there is more to Greece than sun drenched coasts, white washed buildings, blue domes and romantic sunsets but we will be dreaming of just that till we get there. 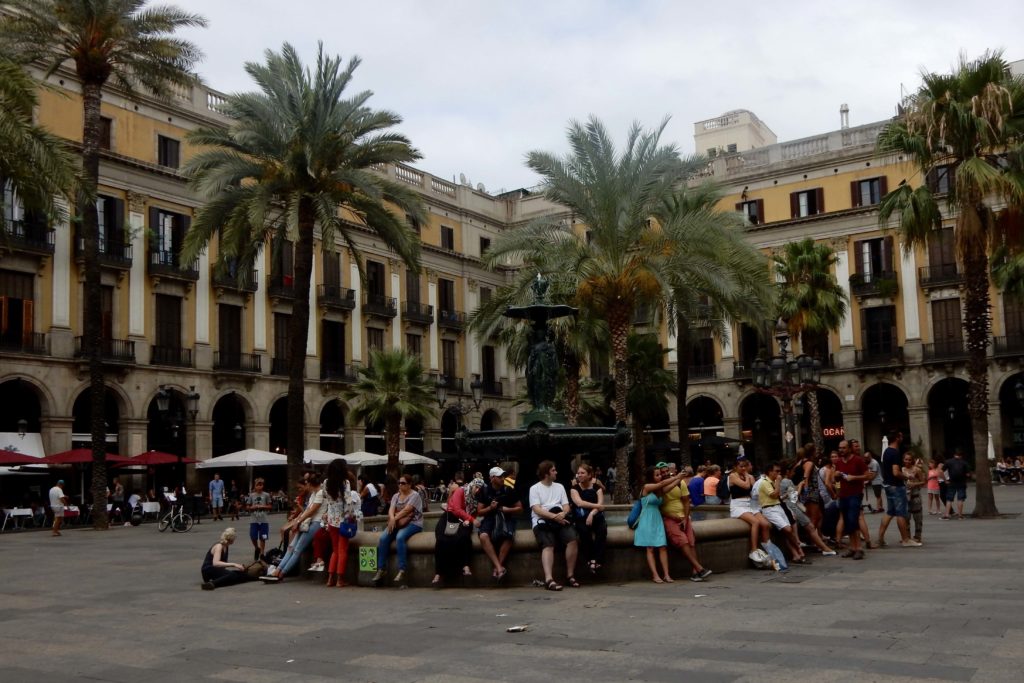 Plaça Reial (“Royal Plaza”) in Barri Gòtic of Barcelona near where we stayed
In Woody Allen’s “Vicky Cristina Barcelona”, two friends spend a summer in Spain; unbeknownst to them, they have an affair with the same painter. It wasn’t just the stunning cast and sexy plot, but the iconic shots of summer in Barcelona that left me wanting to see more of Spain. 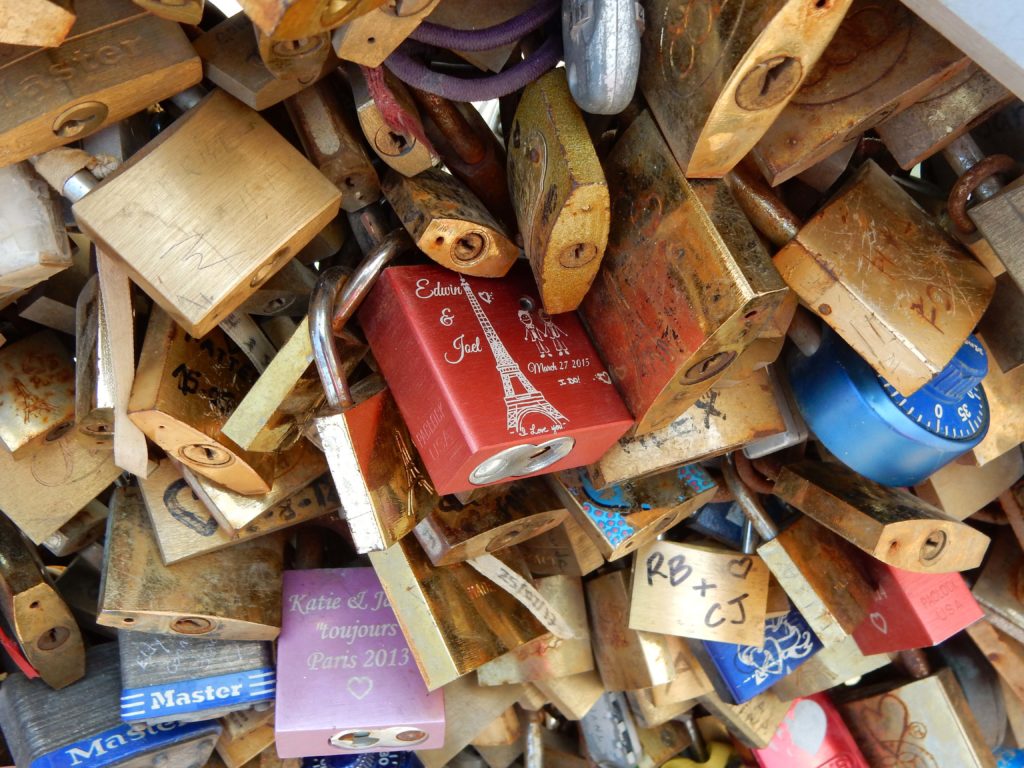 Love Locks in Paris, France
A writer’s trip to Paris with his fiancée and in-laws turns into a time-traveling experience in “Midnight in Paris”. The movie showcases Paris in all its glory by day – think Eiffel Tower, Arc de Triomphe, and outdoor street cafes. To top that it then re-creates what the city was like during the 20s at night. Paris is our Teen’s favorite place, but then again you would be hard pressed a find girl who does not love France! 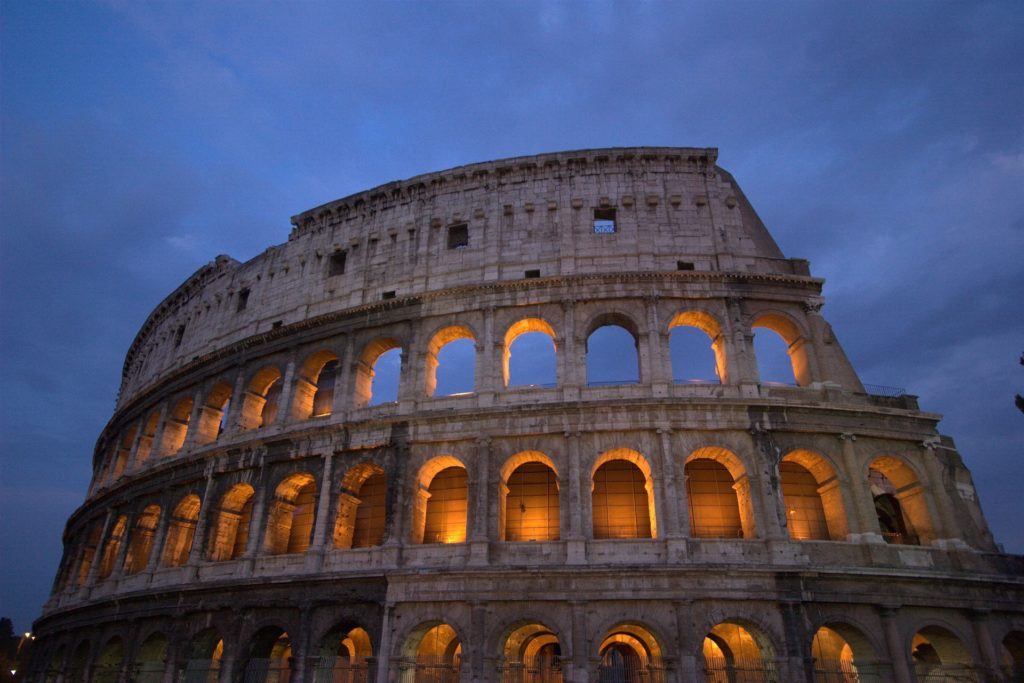 The Eternal City’s famous sights are the backdrop for the love story in the “Roman Holiday”.  While the leads, played by Hollywood icons, Audrey Hepburn and Gregory Peck, fall for each other, we fall for all things Italy. See how I have Italy twice on the list, one of my favorite countries and we have been there on 3 separate trips. 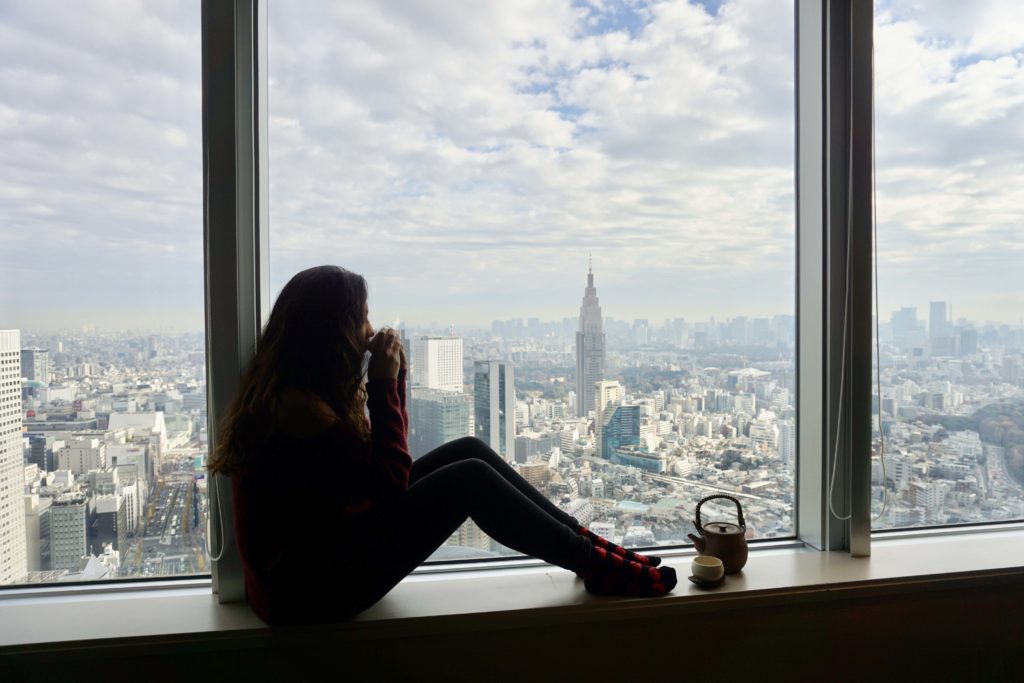 In “Lost in Translation”, two American strangers abroad form an unlikely bond in their isolation. Tokyo’s high-energy culture wakes up their passion for life. Bill Murray and Scarlett Johansson play two characters adrift in their hotel.  Together they escape into Tokyo with its nonstop energy.  We ended up in Japan and the iconic Park Hyatt Tokyo thanks to watching this movie multiple times.

Rice fields in Bali
Julia Roberts plays a married woman in “Eat Pray Love” who realizes how unhappy her marriage really is, and that her life needs to go in a different direction. After a painful divorce, she takes off on a round-the-world journey to “find herself”. In her travels, she discovers the true pleasure of nourishment by eating in Italy – the power of prayer in India – the inner peace and balance of true love in Bali.  Just thinking of Bali calms you down, try it – conjure up images of terraced green rice fields, pretty fruit bowl that spell Peace or Kind (don’t know what I’m talking about, look it up in Instagram)

Water Palace, Jaipur
A group of British seniors check in to the newly restored Marigold Hotel in Jaipur, India, with visions of an exotic retirement, but arrive only to find the hotel on its heels. Proving that travel adventures aren’t only for the young, this film “The Best Exotic Marigold Hotel” shows India’s dynamic and transformative appeal for all. Judi Dench’s character echoes this sentiment: “India hits you like a wave. If you resist, you will be knocked down. But if you dive into it, you will be alright.”  All I got to say is – Never resist new experiences! 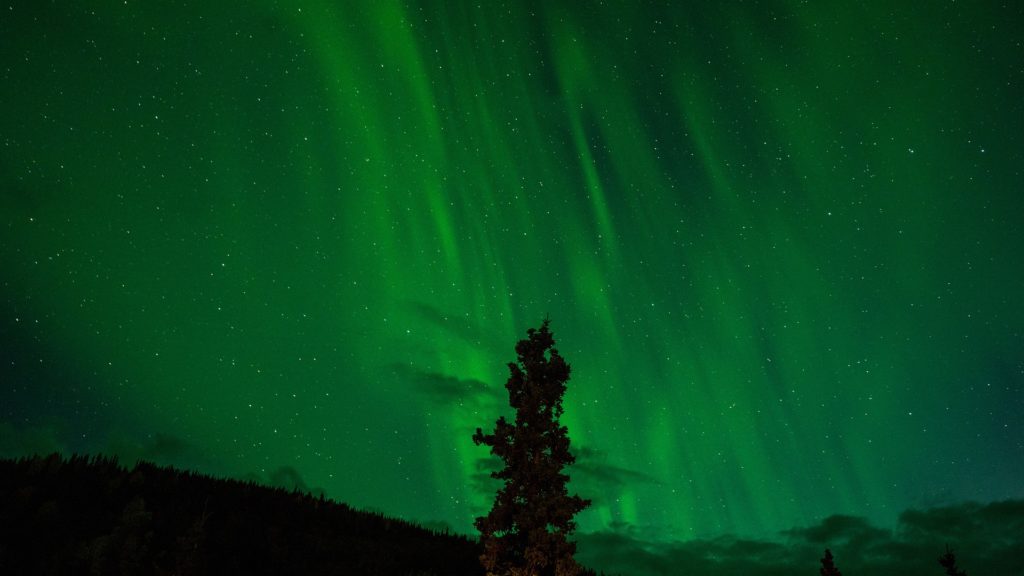 “Into the Wild” is the true story of a top student and athlete who gives up everything after his college graduation in favor of hitchhiking to Alaska and surviving in the wilderness. Based on a true story, this movie follows Christopher McCandless as he tries to shed his material life and get in touch with real life and nature. After graduating from college, Christopher sets out on a road trip through the USA before ending up in Alaska. The movie was filmed throughout the United States, in Alaska, California, Oregon, Washington, Georgia, Arizona, Nevada, and South Dakota.

In “Sideways”, two middle-aged men, Miles and Jack, try to recapture their carefree days with a “mancation” centered around wine and women. The movie created a huge boost to tourism not only to the Napa wine region, but also to Santa Barbara’s wine country, where most of the movie took place. We have been to Napa and fell badly in love with the rolling hills and endless vineyards and dream about someday retiring there but Santa Barbara touted as the American Riviera is still on our list. 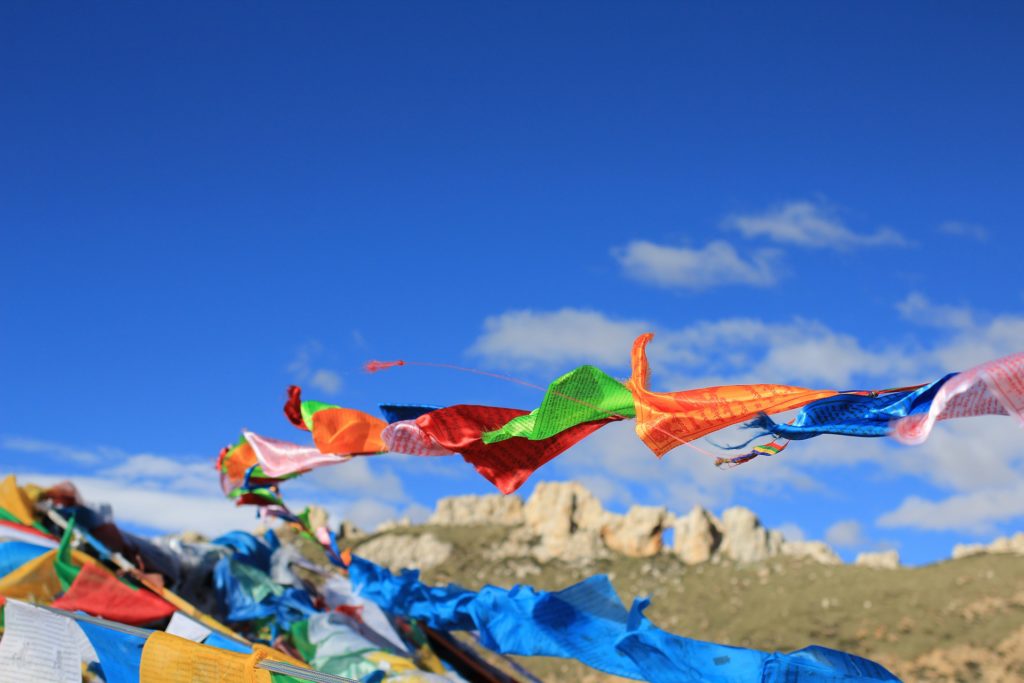 Prayer Flags in Tibet
In “7 Years in Tibet”, Brad Pitt plays an Austrian explorer who befriended the Dalai Lama as China was taking over Tibet.  It’s a true story, and some of the scenes in the movie were actually filmed in Tibet. Other shooting locations include Argentina, Canada, Austria, Chile, and England.

Looking for Walter Mitty during our Glacier Hike in Iceland

In “The Secret Life of Walter Mitty”, Ben Stiller plays a negative assets manager who works for Life Magazine. The only excitement in Walter’s life are the daydreaming adventures he regularly escapes to at the most unexpected moments. But when the negative that is destined to be on the cover of the last print edition of Life Magazine goes missing, Walter takes the plunge and sets on a quest to track it around the world.  The Secret Life of Walter Mitty was filmed in Greenland, Iceland, Yemen and Afghanistan and the Himalayas.  This one is hubby’s favorite and inspired our trip to Iceland.

“Lord of the Rings” is a New Zealand based movie.  Peter Jackson’s award-winning series never fails to leave you stunned by the diverse and beautiful landscape of New Zealand. From glaciers to rivers, mountains, and forests, New Zealand’s beauty is the star of this movie. It launched the country’s modern tourist industry and made it one of the premier destinations for adventure seekers.  A place we dream of visiting soon.After landing in Auckland airport, every Middle Earth fan will want to visit the Hobbiton Movie Set in the North Island’s town of Matamata.  Jackson has rebuilt the entire outdoor film set of Hobbiton in all its hobbit-hole, gardeny-green glory.  Visitors can stroll through the lane where Gandalf first arrived in Hobbiton, pass by Sam’s house, gaze across the lake at the Green Dragon tavern, dance under the Party Tree and climb the hill to Bilbo’s house at Bag End, where J.R.R. Tolkien’s epic adventure begins. 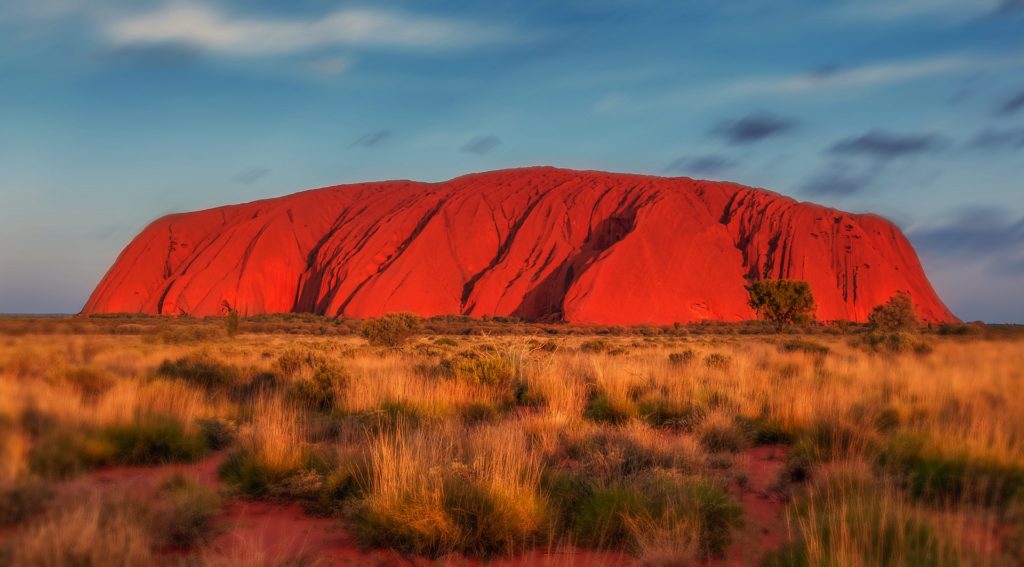 “Crocodile Dundee” is an Australian-American comedy film set in the Australian Outback and in New York City staring Paul Hogan as the weathered Mick Dundee. The movies made everyone fall in love with Australian wilderness and everyone wanted to be an Aussie. Still trying to convince my kids that there are no giant spiders in Australia, so we can plan a trip there! 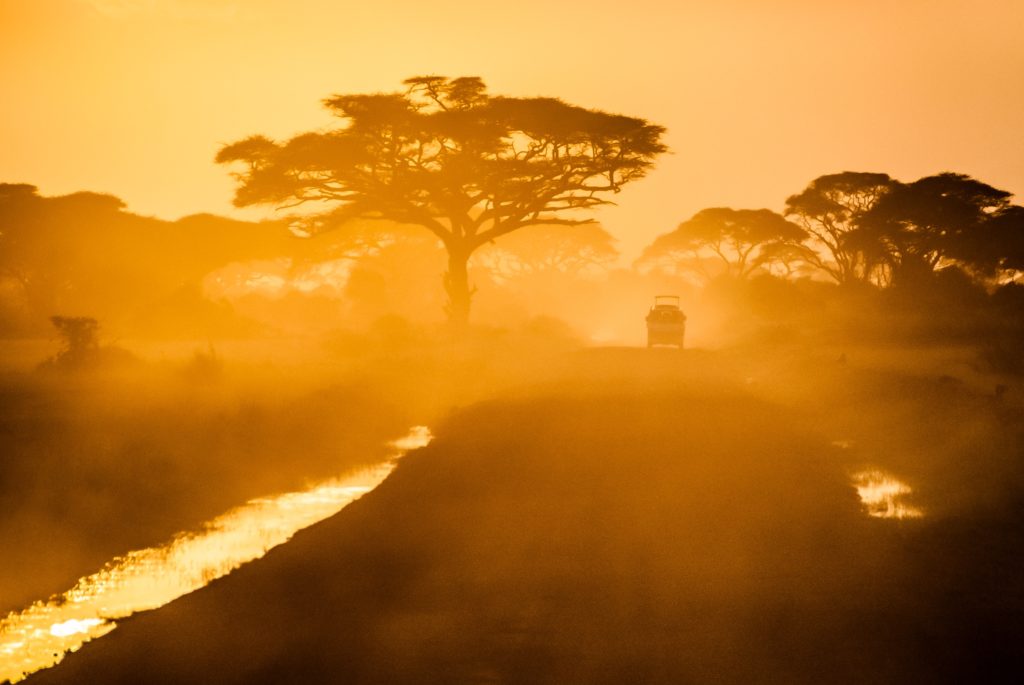 Kenya Safari Photo by Sergey Pesterev on Unsplash
The draw of “Out of Africa” isn’t just icons Robert Redford and Meryl Streep playing passionate lovers, but stunning scenes of Kenya’s raw and untamed landscapes. The movie is a love story set in Kenya between a baroness / plantation owner and a hunter. Besides Kenya, parts of the movie were also filmed in England. After the movie was released, Kenya became a popular tourist destination for safaris.  Will be watching it again this weekend… any guesses where we are going soon?!

These are my top travel movies that I have watched more than a few times when the next trip is too far away. What are some of your favorite movies that inspire Travel?

Hi I'm Priya!  I'm always trying to escape the Suburbs to find cool places, nice hotels, modern art, soft adventures and hot air balloon rides... I strongly believe that you can have authentic and awesome experiences when travelling with kids and don't have END_OF_DOCUMENT_TOKEN_TO_BE_REPLACED