Aix-en-Provence is a quaint town that is full of French countryside charm, colorful Provencal markets, Plane tree line streets where every fountain holds a secret, each mansion house has a story to tell. Cézanne’s colors are all around you, you’ll actually feel like you’re meeting the painter amongst the places and landscapes and his favorite mountain – Sainte-Victoire which marked the life, the eye and the work of the father of modern painting.

Paul Cezanne was a French artist and Post-Impressionist painter whose work laid the foundations of the transition from the 19th century conception of artistic endeavor to a new and radically different world of art in the 20th century. Cezanne can be said to form the bridge between late 19th century Impressionism and the early 20th century’s new line of artistic enquiry, Cubism. Both Matisse and Picasso referred to Cezanne “is the father of us all”.

Cezanne’s work demonstrates a mastery of design, color, composition and draftsmanship. His often repetitive, sensitive and exploratory brushstrokes are highly characteristic and clearly recognizable. He is said to have used planes of color and small brushstrokes that build up to form complex fields, at once both a direct expression of the sensations of the observing eye and an abstraction from observed nature. The paintings convey Cezanne’s intense study of his subjects, a searching gaze and a dogged struggle to deal with the complexity of human visual perception.

The Sainte-Victoire mountain near Cézanne’s home in Aix-en-Provence was one of his favorite subjects and he is known to have painted it over 60 times. Cézanne was fascinated by the rugged architectural forms in the mountains of Provence and painted the same scene from many different angles. He would use bold blocks of color to achieve a new spatial effect known as “flat-depth” to accommodate the unusual geological forms of the mountains. Cézanne travelled widely in the Provence region.

Here are 6 of those painting from the 60 he painted of his beloved Sainte-Victoire. 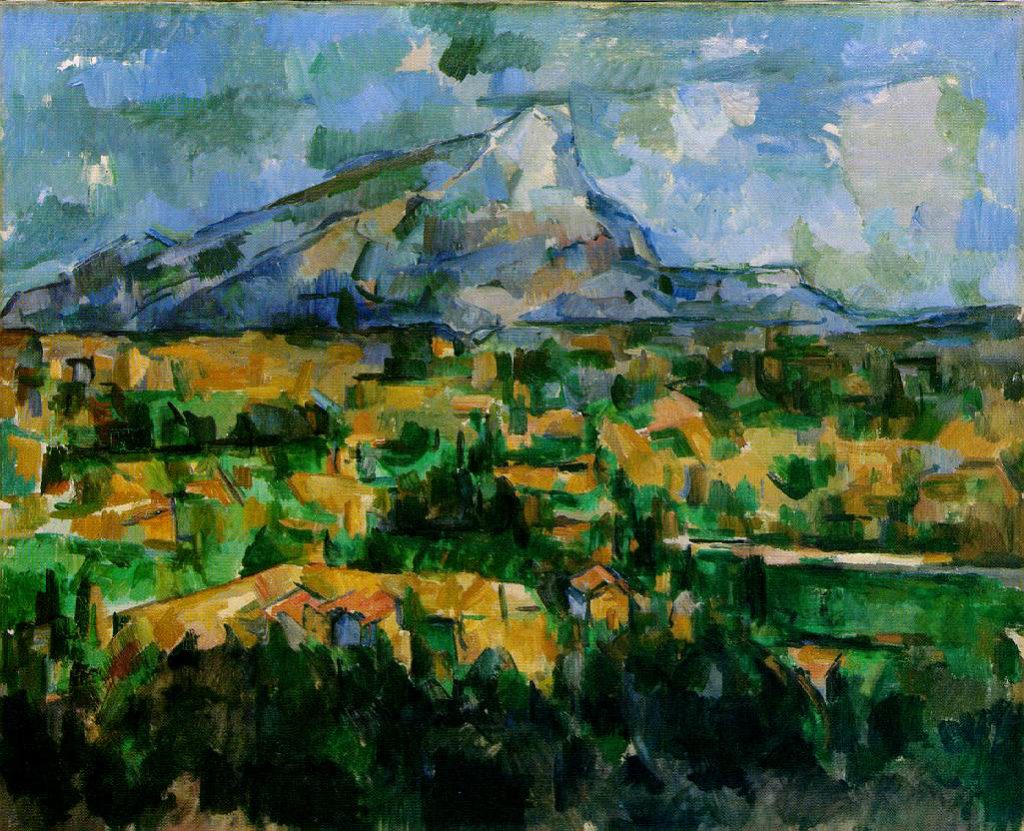 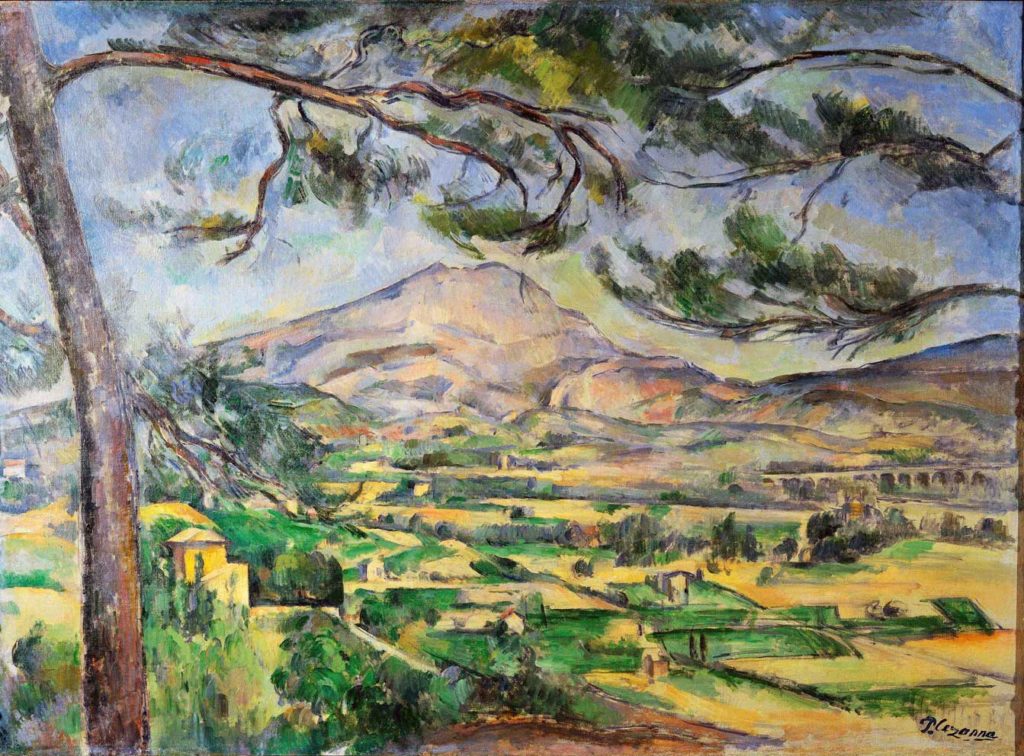 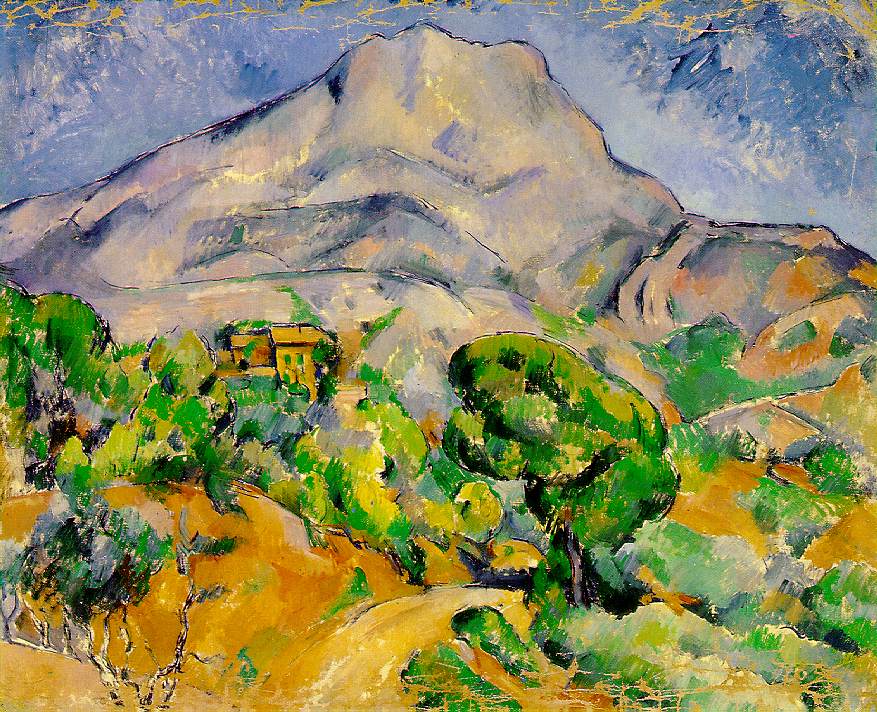 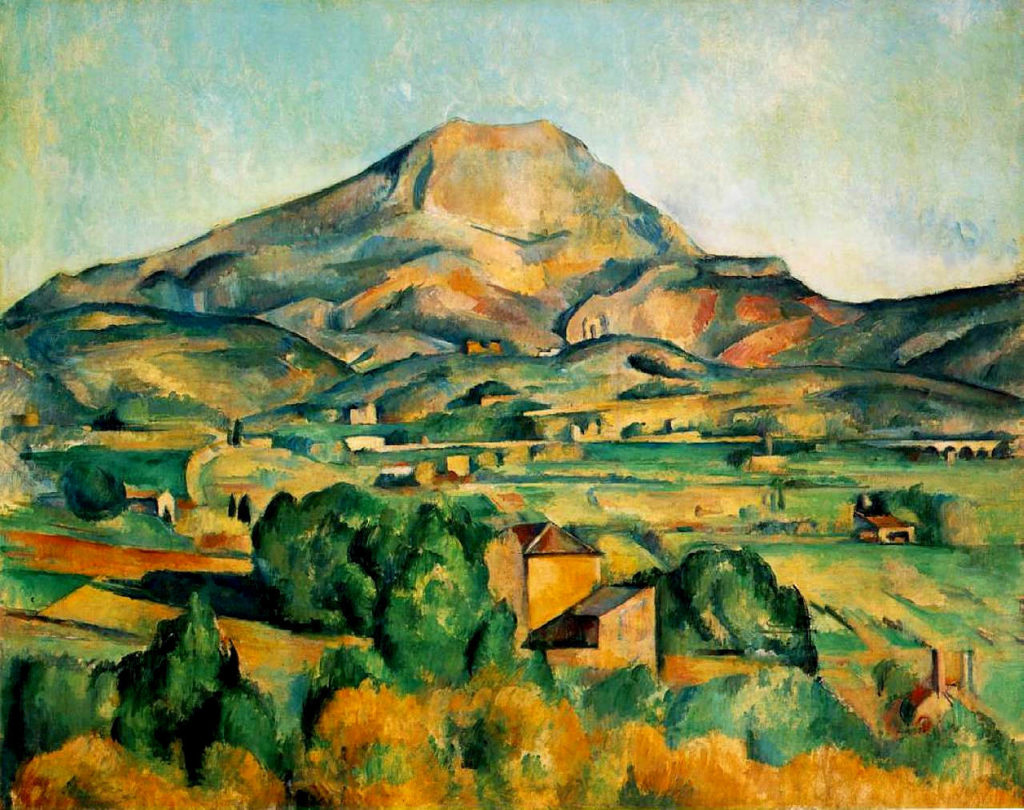 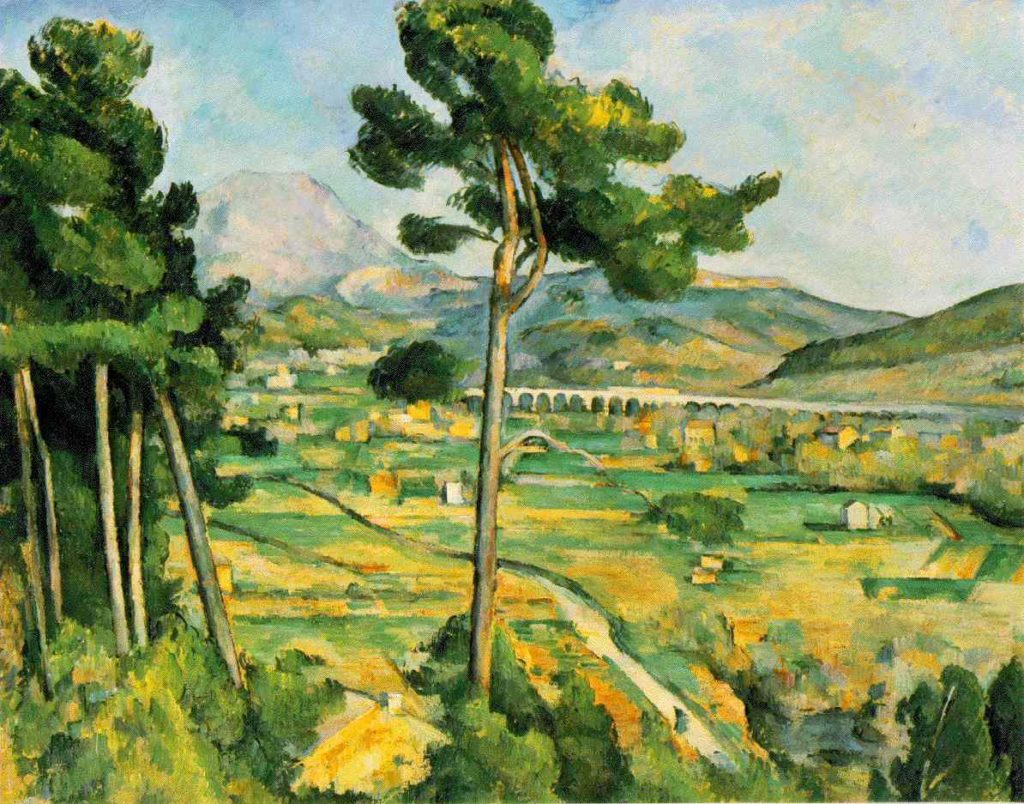 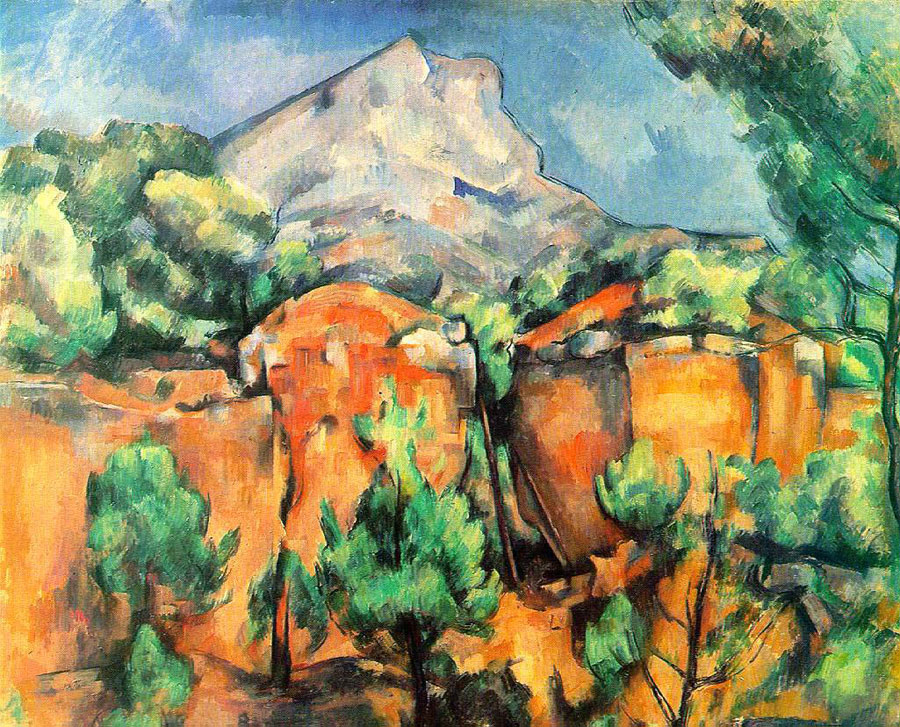 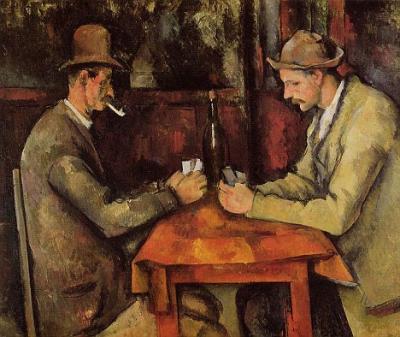 Cezzane’s most expensive painting ever

The nation of Qatar which is better known for its oil than its European art collection has purchased a painting by the post Impressionist, Paul Cézanne for what is thought to be the highest price ever paid for a work of art. The Card Players was purchased for more than $250m. There are four other versions of the painting located in the collections of the Metropolitan Museum of Art, the Musée d’Orsay, the Courtauld, and the Barnes Foundation. Qatar was ranked the world’s biggest contemporary art buyer last year. The Qatar National Museum is now a likely new home for The Card Players.

You can open the door of Cézanne’s studio and enter the artist’s private world. Discover the house where he began painting, by exploring the grounds and the family property of Jas de Bouffan. See some of his works in the space dedicated to him in the Granet Museum. In the Bibémus Quarries, look through Cézanne’s eyes at Sainte-Victoire opposite you.

Walk in Cézanne’s footsteps and visit the city as he experienced it. A pedestrian route marked by studs stamped with a “C” leads you from the house where he was born to his final resting place in the St Jean cemetery. Discover the landmarks of his early years (the house where he lived as a child, his schools, etc), the places that marked him, the homes of his family and acquaintances, the cafes where he met his friends and other artists…

Ask at the Tourist Office for the Cézanne Pocket Guide. This free mini-guide is essential for following the painter’s life and work in Aix-en-Provence and the Aix Region, step by step. 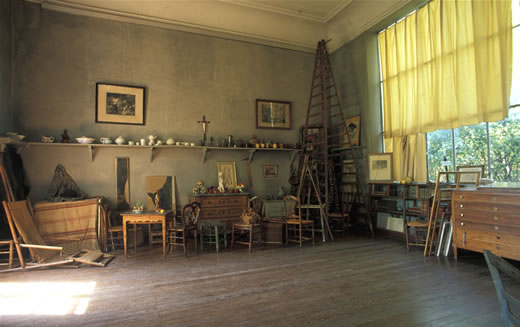 On 1st September 1902, Cézanne gradually settled into his large country studio. He worked there every day during the last four years of his life. All of Cézanne’s admirers are well aware that this is where you can feel the painter’s presence most strongly.

It is here, on the Lauves hill, among the objects he treasured, the models of his last still lifes, his furniture and his work tools, that you will feel the painter’s presence most intensely.

In his quiet, brightly-lit studio, you’ll see the objects which were dear to him, the models for his final still-life paintings, his furniture, equipment he worked with, a thousand tiny details which connect you to the works of art created within these walls and today exhibited around the world. This is where you will feel the master’s presence most strongly, in the human simplicity of his everyday life.

From 1902 until his death in 1906, Cézanne worked every morning in this studio of light and silence, the birthplace of dozens of paintings that are now owned by the world’s great museums, including the last series of Large Bathers.

Check the website for additional information.
9 Avenue Paul Cézanne,13090 AIX EN PROVENCE
English tour at 5pm
From Monday to Sunday from 10am to 6pm.

Paul Gauguin : The artist who went to Tahiti and never came back

Gustav Klimt : The Golden Kiss and more at the Belvedere, Vienna

Jackson Pollack at the Dallas Museum of Art

Frida Kahlo at the DMA

4 thoughts on “The man and his mountain : Paul Cezanne and Sainte-Victoire”

Hi I'm Priya!  I'm always trying to escape the Suburbs to find cool places, nice hotels, modern art, soft adventures and hot air balloon rides... I strongly believe that you can have authentic and awesome experiences when travelling with kids and don't have END_OF_DOCUMENT_TOKEN_TO_BE_REPLACED