When in Seville a romantic horse carriage ride is a must, just like a boat tour on the Siene is a must.  Seville is a walkable city but you have to walk around a lot to cover all the important sights plus it gets pretty hot in the summer.  We hired ones of the carriages right outside the cathedral after visiting the Alcazar. All the carriages are licensed and the fare is fixed. The horses and carriages are kept in perfect condition and when we sat inside everything was leather finished.  We were shaded from the sun by a canopy.

The use of horse drawn carriages started long time ago, when the Feria de Abril or Seville April fair celebrated 2 weeks after the Easter Holy week was starting to become a tradition in Seville. At that time, important personalities and wealthy families used this carriages to get to the April’s Fair facilities. The ride lasted about an hour and took us back to all the sights of Seville stopping at the Plaza de España for some pictures. It also went through the Maria Luisa Park which we had wanted to explore more. The carriage ride gave a nice overview of the city and helped us get oriented.

Here is a photo blog from our horse drawn carriage ride.

Horse carriages waiting around every corner

Spanish bullfights are a spectacle worth watching and probably our most famous tradition. The Seville bullring (plaza de toros) is called the Plaza de Toros de la Real Maestranza de Caballería de Sevilla, but it is popularly known as La Maestranza. It is the most ancient bullring in Spain. 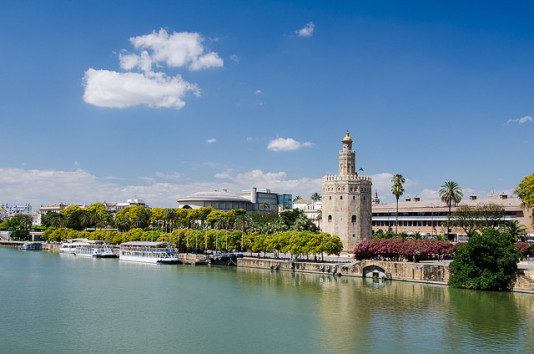 The Torre del Oro (Tower of Gold) is a historic watchtower that was built in the early thirteenth century by the Almohades, who ruled over Andalusia. The tower is now home to a naval museum.

The Palacio de San Telmo, constructed in the seventeenth century as a school for navigators, is characterized by its richly ornamented Baroque portal. After having served a number of different purposes, the building is now the official residence of the president of Andalusia. 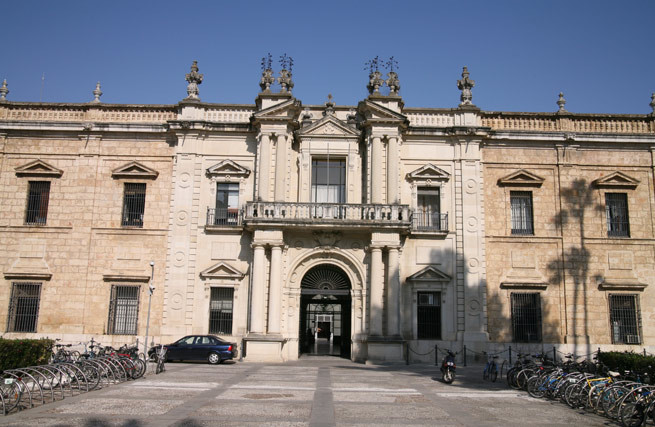 The enormous complex currently home to the University of Seville was long the only tobacco factory in Europe. The richly decorated structure was surrounded by a moat and guarded by sentries to prevent theft of tobacco.

Three former pavilions, all designed by Aníbal González, are arranged around the Plaza de America, a beautiful square with flowerbeds and a central pond. Each building has a different architectural style.
The small Royal Pavilion, bordering the north of the plaza, was designed in a flamboyant Gothic style. The renaissance-style Pavilion of Fine Arts – now the Archaeological Museum – and the Mudéjar Pavilion – now the Museum of Andalusian Folk Arts – frame the plaza to the east and west.

The Spain Square or Plaza de España is an exuberant and magnificent plaza located in María Luisa Park. It was one of the main constructions and symbols of the Ibero-American Exposition World’s Fair that took place in Seville in 1929. We stopped here for some pictures and to admire the ceramic tile works. 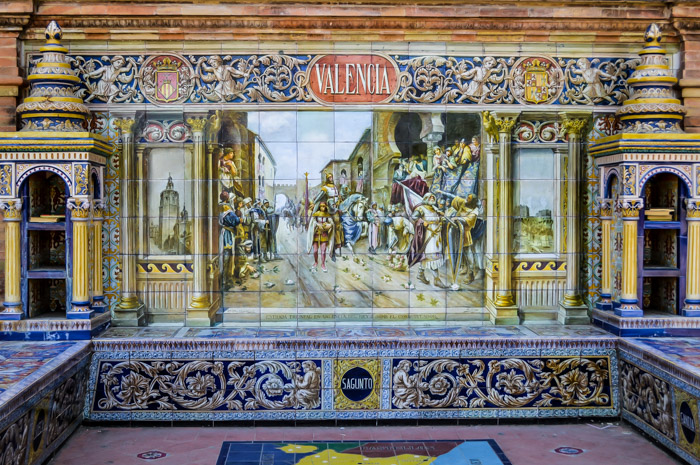 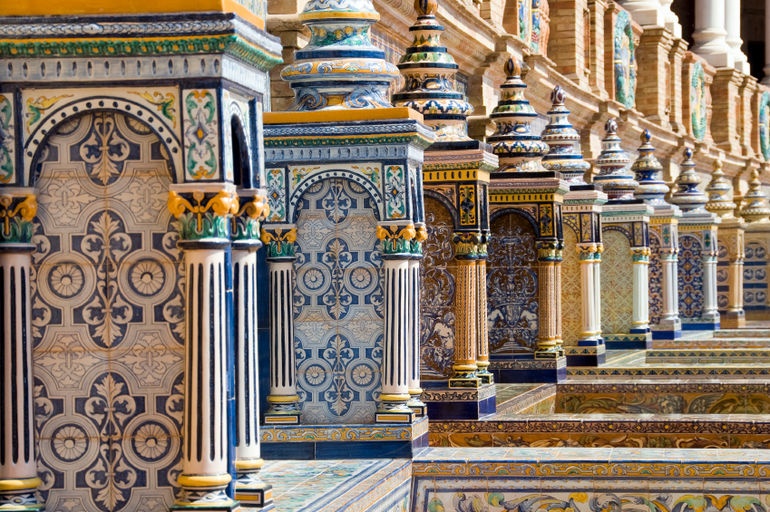 6 thoughts on “Photo diary : A horse carriage ride around Seville”

Hi I'm Priya!  I'm always trying to escape the Suburbs to find cool places, nice hotels, modern art, soft adventures and hot air balloon rides... I strongly believe that you can have authentic and awesome experiences when travelling with kids and don't have END_OF_DOCUMENT_TOKEN_TO_BE_REPLACED