An abundance of colorful Spanish dishes, exciting combinations of tapas, fresh seafood (for Mr.Suburbia) and bubby Cavas were waiting for us in Spain. Spanish wines were light, fruity, and delicious – they were served slightly chilled and didn’t really need accompaniment, but great with some Queso Manchego. I shamelessly confess I ordered the sinful Crema Catalan, every night single night in Spain!

Being a Vegetarian, when planning our trip to the Andalucia region of Spain, I was a tad bit worried. Having not much experience with Spanish cuisine before had me wondering, what am I going to eat in Spain! I had seen so many photos of Jamón Ibérico that had me concerned if I would find vegetarian dishes in Spain.

Spanish Dishes you MUST try when visiting Spain

Below are some of the dishes we were lucky enough to enjoy during our visit. I added a few EASY recipe links for the Spanish dishes. Make some foods from Spain for friends and family and travel through your tastebuds!

Paella is traditionally a dish that is cooked in large quantities over an open fire outdoors. It is a traditional Spanish dish that is often cooked for celebrations or gatherings. This dish has existed in the Iberian Peninsula in one form or another since around the 10th century.

Short-grained Bomba rice is generally used and flavored with Spanish saffron giving it the yellow color and sweet aroma. Originally traditional Spanish Paella were made with rabbit, snails, and beans. Thankfully, today there are many more variations of paella, like vegetable paella, seafood paella and chicken paella.

Paella is thought to have originated in Valencia and a traditional Valencian paella would include a combination of the following ingredients: chicken, rabbit, snails, duck, great northern beans, artichoke, runner beans, and tomatoes. Throughout Spain, however, mixed paella with a combination of seafood and chicken is more popular. Vegeterian Paella is easy to find.

Here is Jamie Oliver’s Chicken and Chorizo Paella that I have tried to make. I omit the meat and add a few extra veggies to make a vegetarian Paella.

Save this easy-to-make Spanish Vegetable Paella Recipe. You don’t need a fancy paella pan, any shallow casserole or pan will do. I sometimes make it with regular short grain rice. While this paella is also vegan, you can add meat, shrimps/prawns or other seafood if you wish. 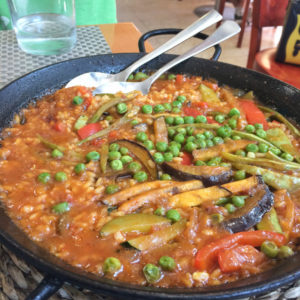 Paella is traditionally a dish that is cooked in large quantities over an open fire outdoors. It is a traditional Spanish dish that is often cooked for celebrations or gatherings. This dish has existed in the Iberian Peninsula in one form or another since around the 10th century.
Print Recipe Pin Recipe

A version of tomato soup, this chilled soup is a refreshing Spanish classic version of tomato soup. The ripest tomatoes, olive oil, garlic, bread, peppers, and cucumber are blended into a silky smooth and served chilled We had this every day when visiting Andalucía in southern Spain. You can even find them at tapas bars. In Cordoba, they serve a thicker version called salmorejo. Usually served with eggs or some ham on the top.

Get this recipe and make your own Gazpacho or Salmorejo

Manchego is a delicious cheese made from sheep’s milk in the La Mancha region of Spain. This cheese can be aged anywhere from 60 days all the way to 3 years, and the price varies accordingly. The flavor of the cheese is mild with a slight nutty flavor. It makes it a perfect complement to the fruity Spanish wines and cavas.

You can tell a traditional Manchego from the zigzag pattern on the rind that is formed by the original presses. You can find Manchego everywhere, from markets in Spain and is often served as an appetizer all by itself, or sometimes with ham and some Andalusian olives in olive oil seasoned with garlic. Manchego is usually cut into thin triangular shaped pieces.

Patatas Bravas is absolutely one of my favorite dishes to order at the tapa bars. This potato dish is served with a spicy aioli. The name bravas (meaning fierce) actually comes from the spicy sauce that the crispy potatoes are smothered in. It is one of the most popular food in Spain.

White potatoes are diced into large bite-sized pieces and fried and then tossed in a spicy tomato sauce and usually an aioli made with paprika. Different regions add various herbs and spices to make their own variation. It was fun ordering it in different towns and cities, just to see which sauce we liked better. The Patatas Bravas in Madrid was my favorite!

Here is Bobby Flay’s Patatas Bravas Recipe I love, the roasted tomato aoili is spot on!

The Spanish omelet is surprising not eaten for breakfast but more as a snack in Tapas bars. We got smiles (that, oh there is the tourist smile) when we tried to order it for breakfast 🙂 It is so much more than the plain ol’ omelet though. The potatoes and onions are slow fried in olive oil then mixed with the beaten eggs for the flavors to mix before cooking. You can also add chorizo, ham, spinach, veggies like zucchini, bellpeppers or whatever you have in hand to make a tasty Tortilla Española aka Spanish Omelet.

You can’t escape the hanging Jamon in Spain! The pork is seasoned with paprika, a staple in many Spanish dishes, and then cured for about three months. It then becomes this marbled sausage that has smoky aromas and flavors.  There are 4 top Spanish Iberian cured meats: Lomo Ibérico, jamón ibérico, chorizo, and salchichón. Lomo Ibérico, jamón ibérico are served thinly sliced and at room temperature. Sometimes, they can presented in a tabla, aka a wooden board and accompanied by chorizo, and salchichón. This dry-cured pork loin is a great compliment to the Manchego mentioned earlier.

A Spanish Sangria is a sweet cocktail made from an infusion of Spanish red wine and fresh fruit. Basically a boozy fruit punch! Perfect to cool off during the hot summer months in Andalucia. IMHO it is perfect when enjoyed by the coast. I can’t wait to go back and spend some time exploring more of the wild coast of Spain. We only got to spend an afternoon in Calella de Palafrugell sipping Sangria and eating some Paella last time.

Start with a good Spanish red wine like a Rioja or Tempranillo. Some chopped fruits like diced oranges, pears, apples, and lemon. A dash of brandy and a little sweetener like sugar or maple syrup. That is it, pour everything into a pitcher, mix, chill and serve. Chill for at least 4 hours, or overnight. The longer it sits, the flavors meld together better.

Every time we walk into a tapas bar, Mr. Suburbia ordered this Spanish dish of sizzling shrimps (prawns). He loved it so much that he was trying to convince me(who has never eaten any seafood) that I just had to try it at least one bite. The aroma was pretty tantalizing when it hits your nostrils, I will give him that 😉 I mostly stuck to my fried eggplant fingers drizzled with a dark honey.

To recreate this Spanish dish at home, just fry some sliced garlic and green chilies in olive oil, throw in the shrimps (prawns) for a couple of minutes and add some parsley. Couldn’t be any simpler!

A churro is a fried-dough pastry that is a family favorite. Churros are a traditional dessert dish with its origins in Spain and Portugal. Best eaten warm dipped in molten hot chocolate!

To be honest, I have not tried to make Churros at home. But we recently bought a AirFryer and I’m going to try this recipe. Will keep you posted.

Crema Catalana or Crema Cremada is a Spanish dessert that is similar to a Crème brûlée. While Crème brûlée is flavored with vanilla, Catalan cream is made with both vanilla and also flavored with orange and/or lemon and has a hint of cinnamon. Considered Europe’s oldest desserts, both versions are delicious! We had the best ones in Barcelona by the beach.

Tapas and Pintxo, small bites, sharable plates & foods you must try in Spain

This Spain Food Guide would not be complete without the mention of Tapas and Pintxo, the small plates and bites that are perfect evening snacks. These little Spanish stories and dishes come in an array of colors, ingredients and flavors!

Pintxo also called Pinchos are snacks or small bites kinda like tapas. Pinchos are small pieces of bread with some sort of topping, arranged beautifully on the bar counter. The main difference between pinchos and tapas is that the bread and other ingredients on a pincho are held together by a small skewer, which is actually what the word “pincho” means to pierce.

Some offering on the menu at the tapas places we tried were: Truffled Meatballs, Lamb Skewers with Olive Oil and Spices, Bruschetta with Goats Cheese, Tomato, Olive oil, Smoked Eggplant, Brie, Quince(an ancient tree fruit) and almonds… don’t you want to plan a trip to Spain?!

At traditional Pintxo restaurants, you’ll get charged for the total number of skewers on your plate at the end of your meal. As with tapas, a meal of Pintxo is best when accompanied by a nice bottle of beer, a glass of wine or Cava.

While Prosecco and other sparklers rely on industrial carbonization to make their wines bubble, Catalan cava, like fine champagne, gets its effervescence and complexity from bottle fermentation. So don’t forget to try some with your Spanish tapas and dishes, when you are in Barcelona.

If you plan a trip to Spain, don’t leave without trying all of these wonderful Spanish dishes & drinks!

You might also like these other Food Diaries:
11 Portuguese desserts you must try
Best ice cream shops in Plano
French Pastries you will love
15 Japanese Food you MUST try
20 Iconic food in Italy
10 Delicious Greek Foods I’m dreaming of eating in Greece

Note: This post may contain affiliate links, partnership or sponsored content. If you purchase an item via one of these links, we may receive a small commission at no extra charge to you. But as always images and opinions are our own. For more information on our affiliates and privacy policy at Outside Suburbia see here.

We have traveled with our kids for over 20+ years and here is our Family Travel Bucket List. It is not always about checking off countries and counting passport stamps, for us when we go Outside END_OF_DOCUMENT_TOKEN_TO_BE_REPLACED