Bad Gastein is an Austrian spa and ski town in the High Tauern mountains south of Salzburg. It’s known for the belle epoque hotels and villas built on its steep, forested slopes. While the area of Bad Gastein has been inhabited and used for things like gold mining for over the years, it came into fashion as a spa town in the late 19th century because of its hot springs. Kings, queens, chancellors, and tsars all enjoyed the healing powers of Bad Gastein. When planning day trips around the Salzburg area, I saw the pictures of the Stubnerkogel suspension bridge and a red platform with views of mountains around and I was intrigued.  As you probably already know – we love road trips and were going to be near the area since Mr.Suburbia wanted to tackle the High Alpine Road at Grossglockner, so we added a visit to Bad Gastein to our Best of Alps Itinerary. 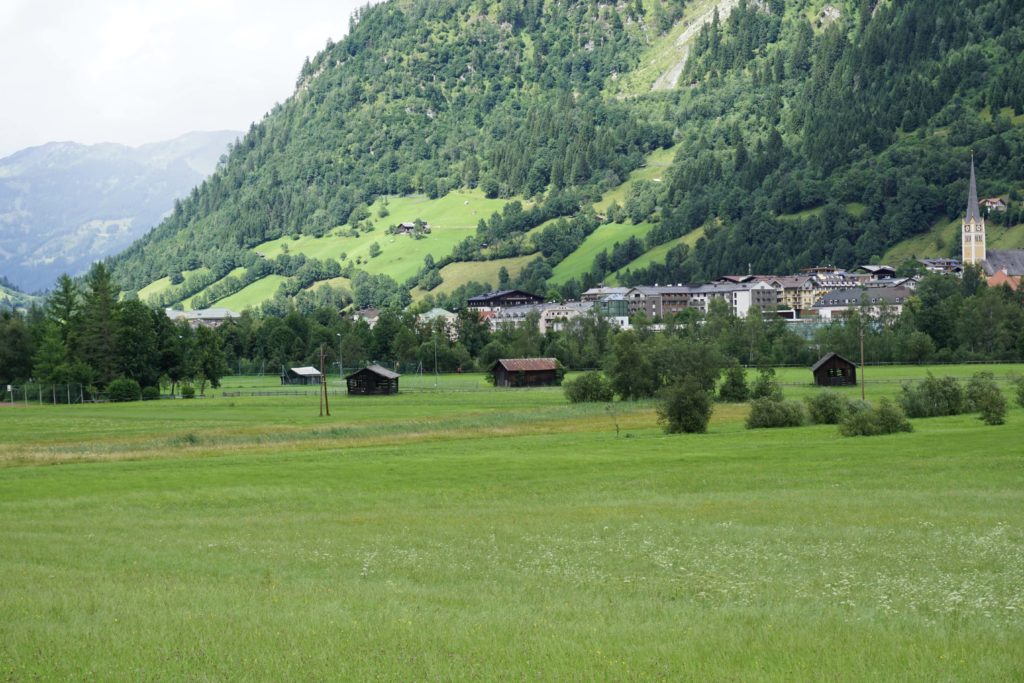 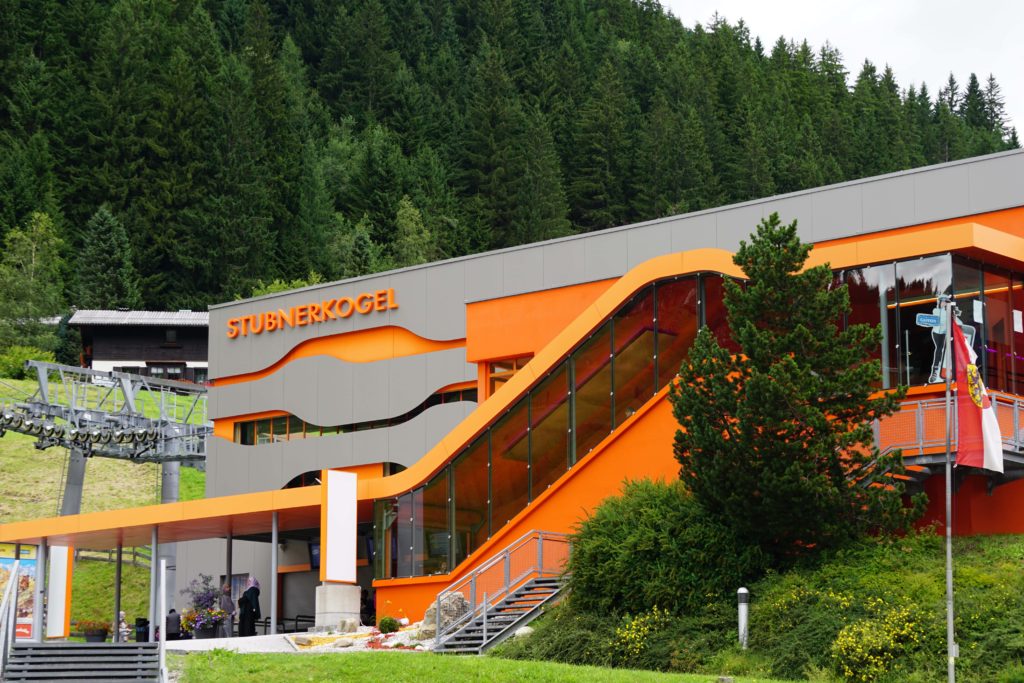 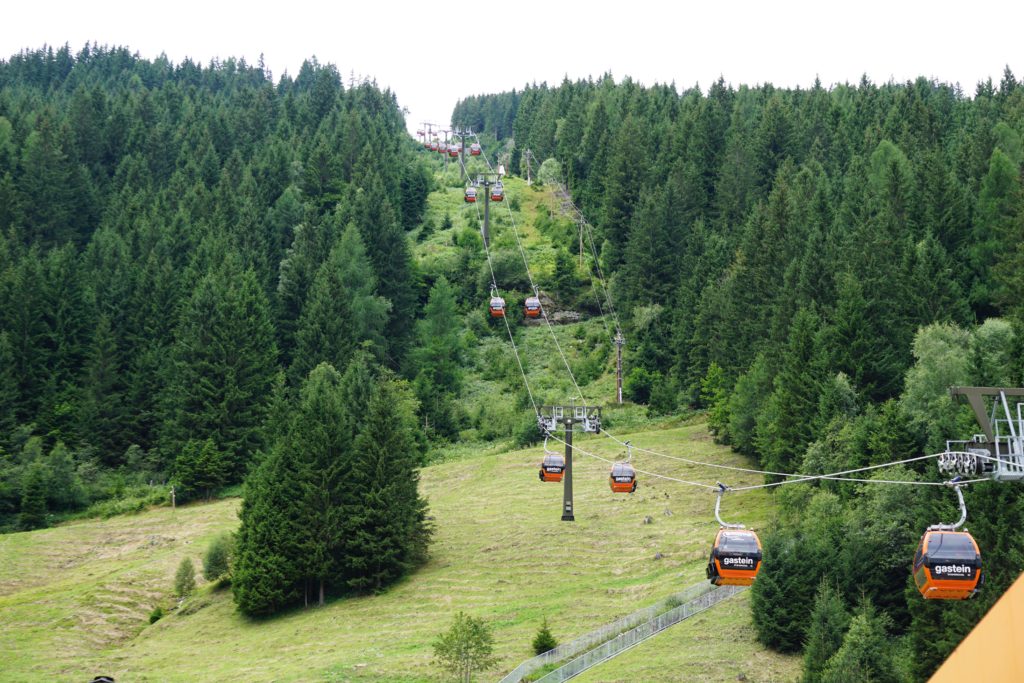 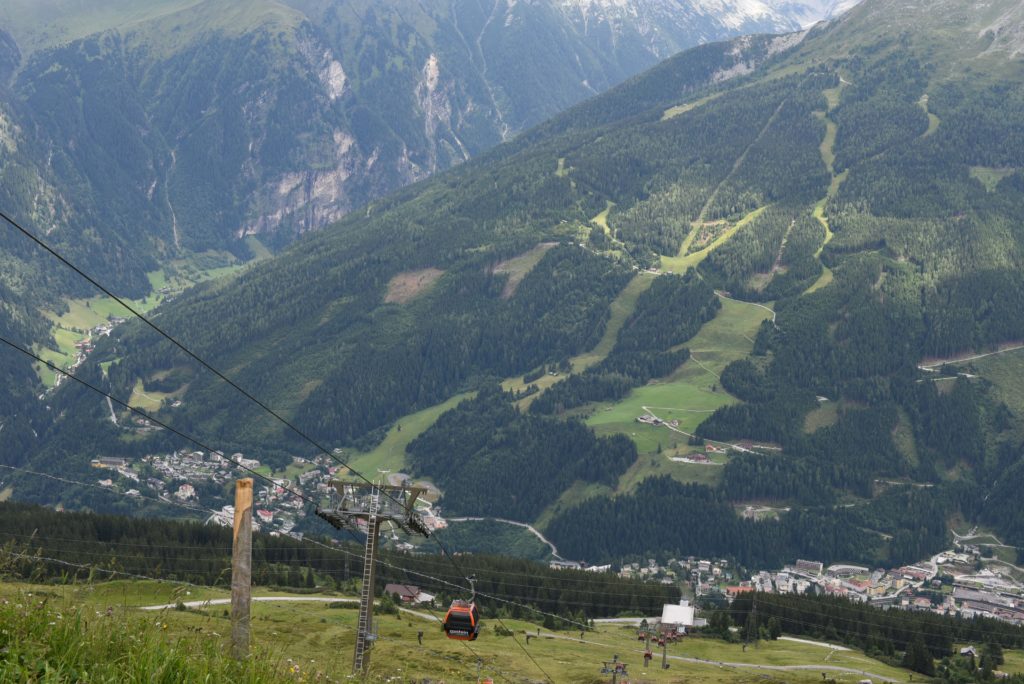 We left early after breakfast in town and drove from Salzburg to Stubnerkogel lift station, parked and bought our Gondola tickets. It was a scenic drive that took about one and a half hours. The ride up the mountain was picturesque and once we got off the bright orange gondola, just a few steps was the hanging bridge.  At 140 meters long and just one-meter wide bridge the suspension bridge was built as a swinging rope construction and leads directly from the terrace of the mountain restaurant to the transmitter station.  Only a wire mesh guard rail separates adventurous skywalkers from the 28-meter drop.  Walking on the bridge was not that scary, just a few butterflies in the stomach.  Although if you have a severe fear of heights then it might be an issue as you might get weak in the knees.  The bridge sways a little with the wind, a few adults gave up, while the kids seemed to enjoy walking fearlessly on the bridge.  The views down the valley were pretty amazing since the bridge is transparent you can see all the way around. 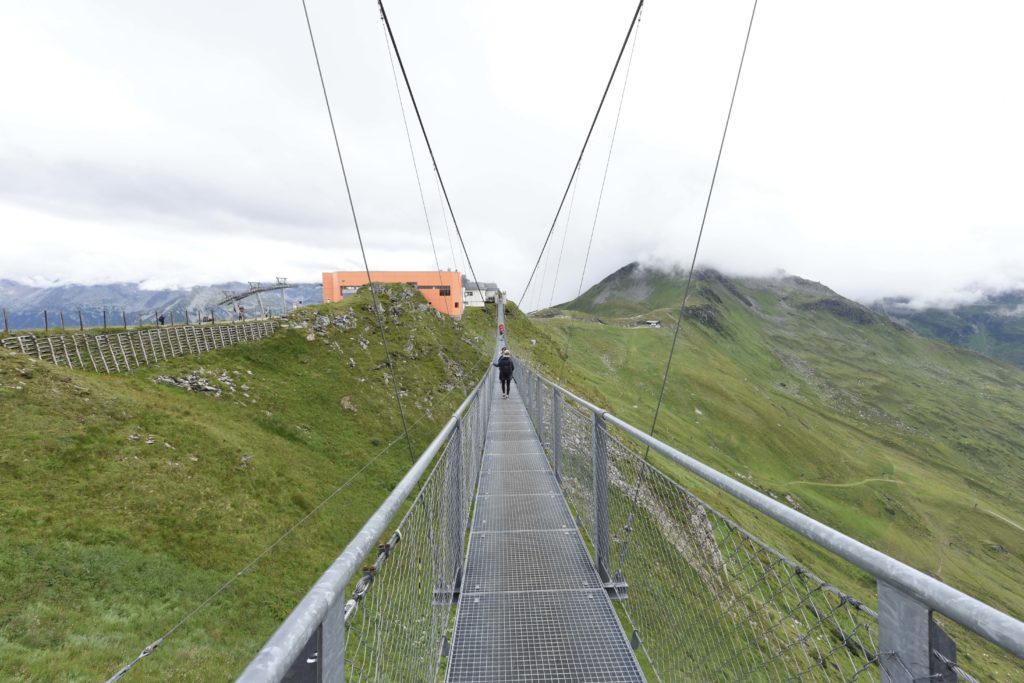 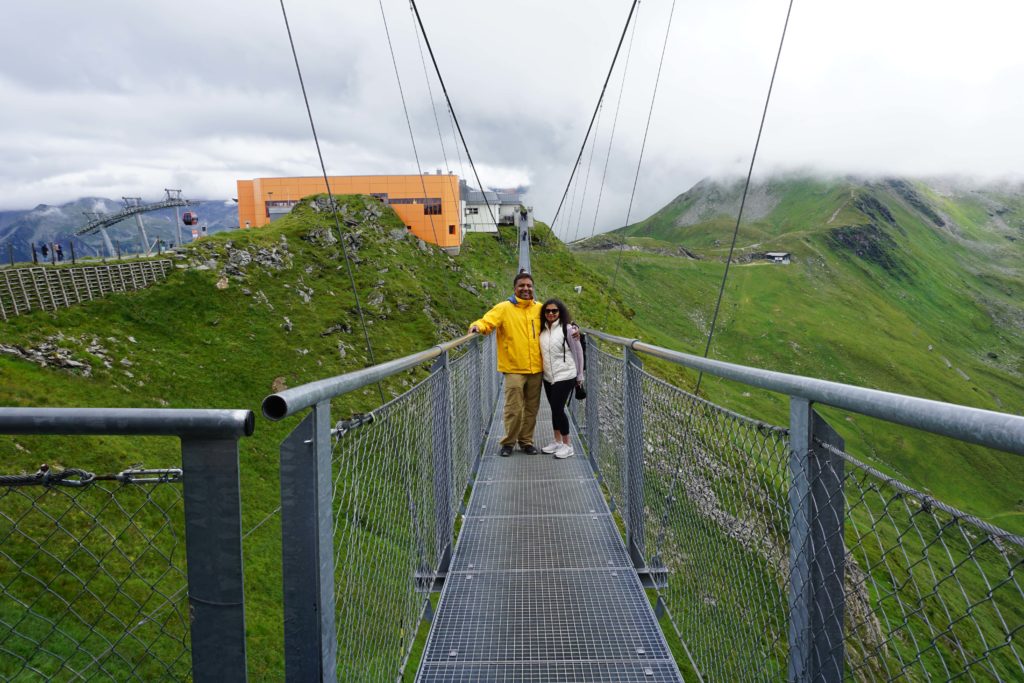 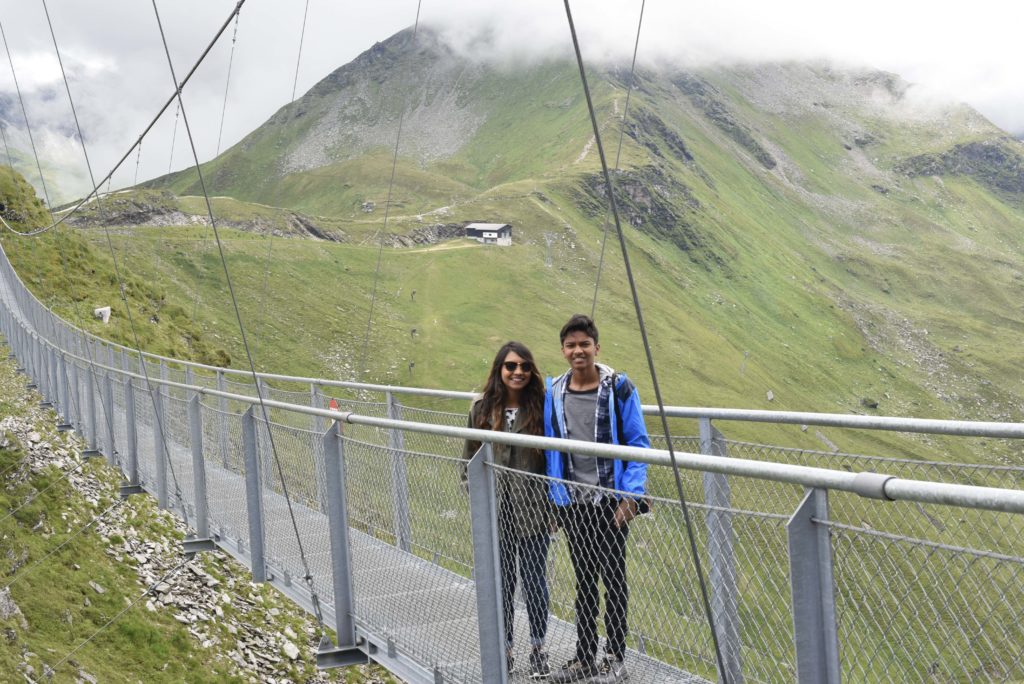 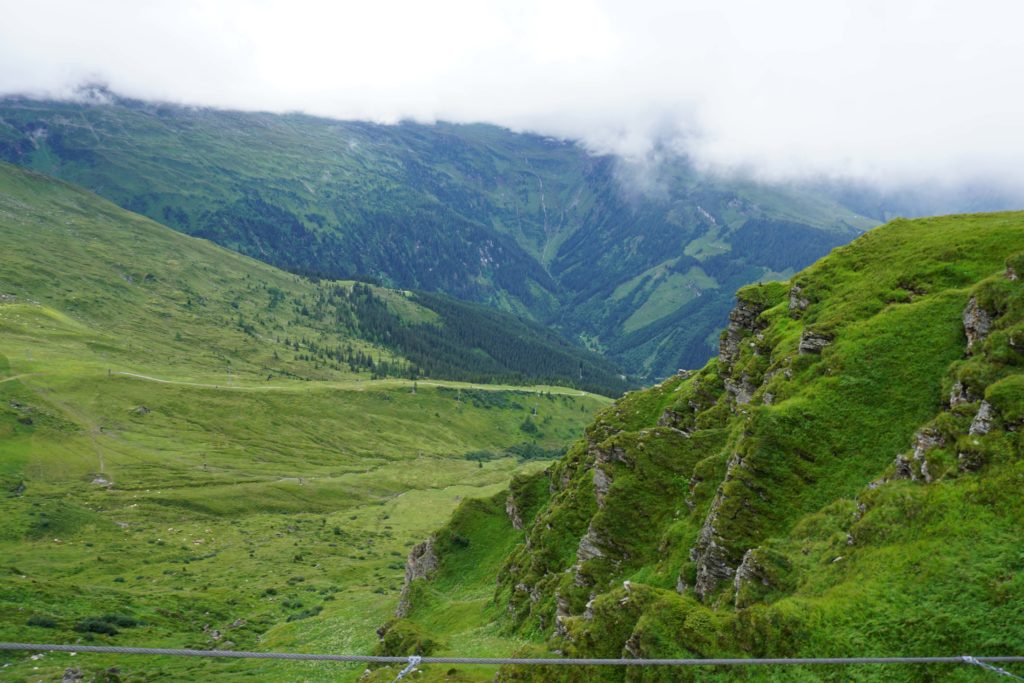 We then walked up to the summit of the Stubnerkogel to enjoy breath-taking views of Bad Gastein below and the surrounding mountain peaks!  The clouds were closing in as there was some rain in the forecast for later in the day, if not for the cloud veil you can see the peak of Großglockner – Austria’s highest mountain at a height of 3798 meters!  The viewing platform Glocknerblick is seven meters in diameter and mainly constructed out of steel and wood.  The platform Glocknerblick is easily accessible by the 140 meters-long suspension bridge.  If you don’t want to walk the suspension bridge, the platform is accessible by a nice walkway that gently climbs up through an alternate pathway.  There are wire-mesh fences around the platform that provide safety for all visitors, while the views of the surrounding mountain peaks are not obstructed. 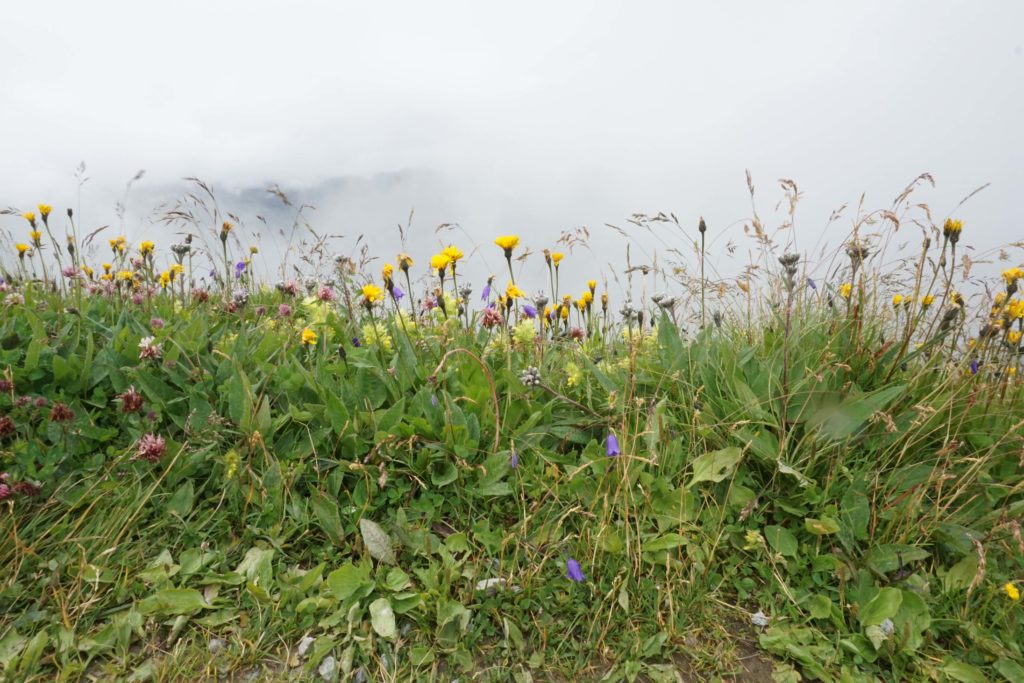 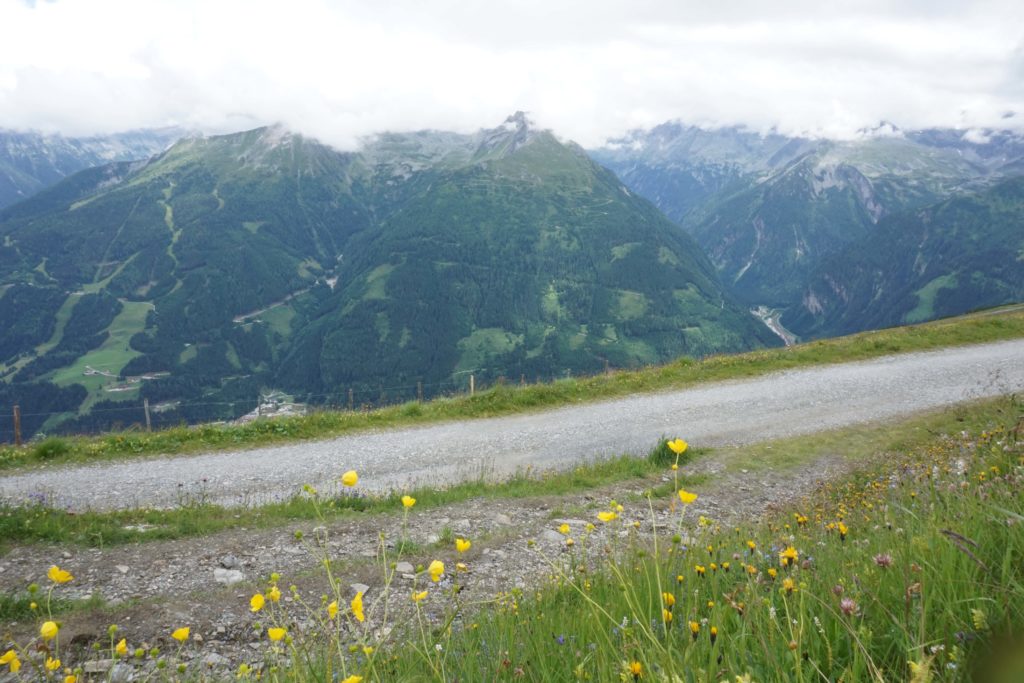 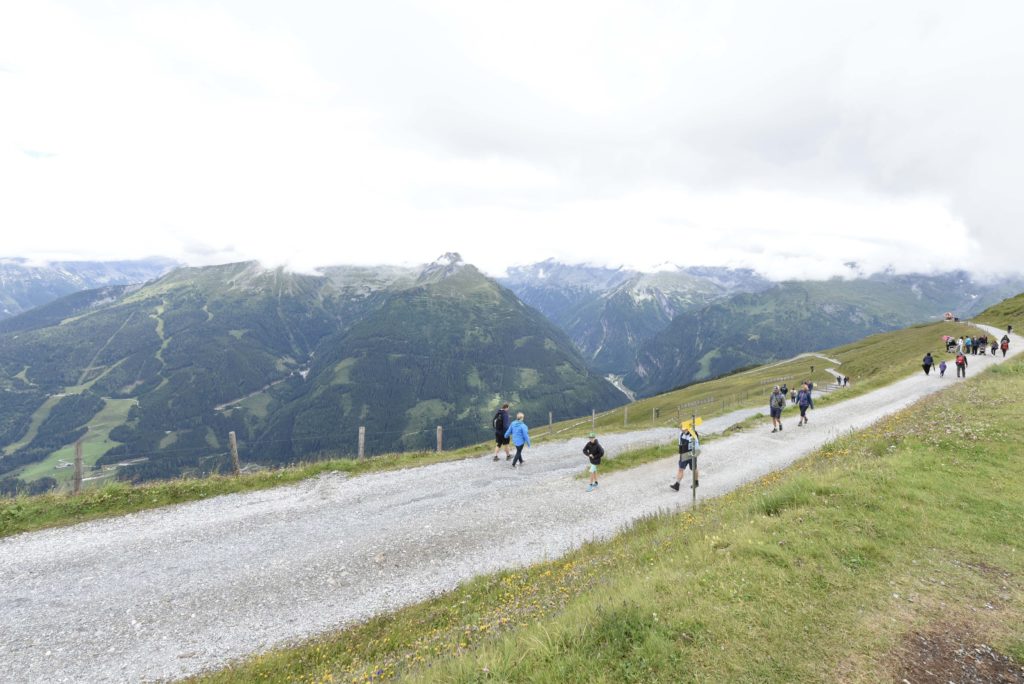 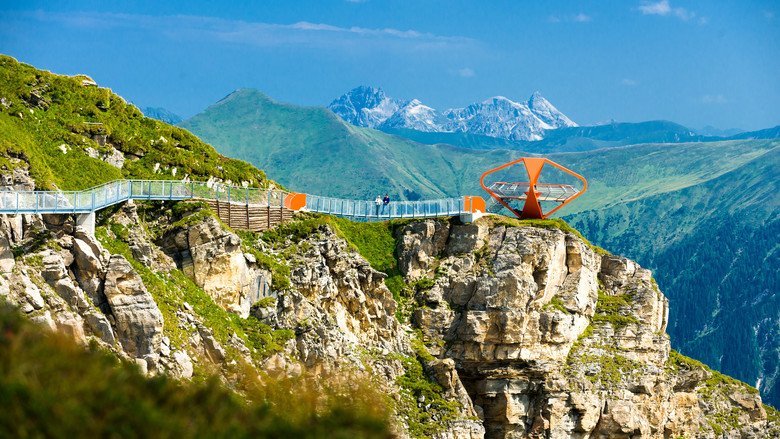 The Rock Trail Stubnerkogel is designed as a walking loop starting and finishing close to the mountain terminal of the Stubnerkogel lift. It begins around 400 meters south of the lift station and leads to another lookout point similar to the Glocknerblick platform. The trail leads through a series of areas of steep, craggy rocks to a striking lookout point at roughly the same elevation. From there a short hiking path completes the circuit back to the Stubnerkogel. 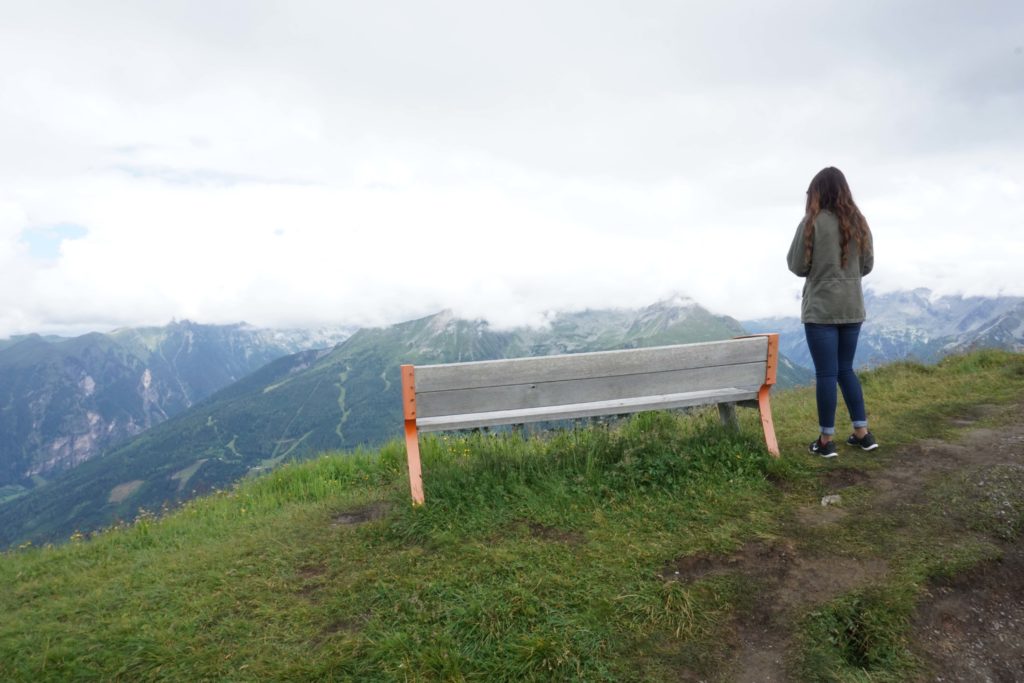 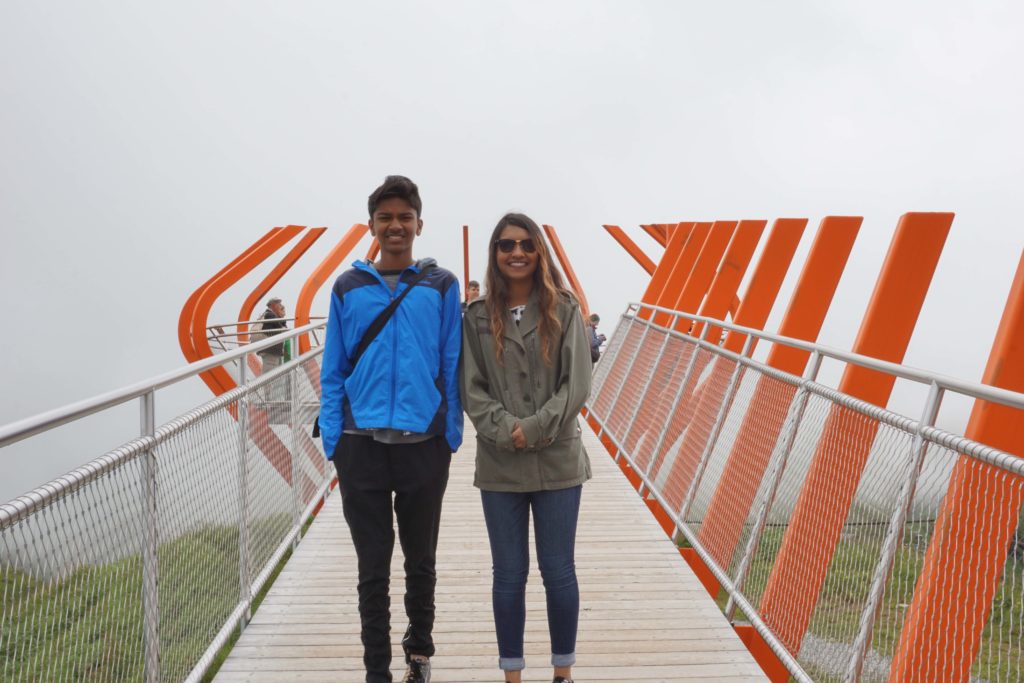 If walking on suspension bridges and rock trails is not your thing, there is still plenty to do in the Gastein valley. On the four mountains Stubnerkogel, Schlossalm, Graukogel, and Fulseck, there is a lot to see and experience – you can go on easy hikes, summit walks and barefoot walks in crystal clear lakes – You can simply stand still, breathe deeply and feel refreshed and renewed.  This place is a paradise for mountain lovers and perfect for a summer holiday in the Austrian Alps!  Although we didn’t spend the night in the area, seeing families enjoying the outdoors biking and hiking had us wishing we did plan a few days here. 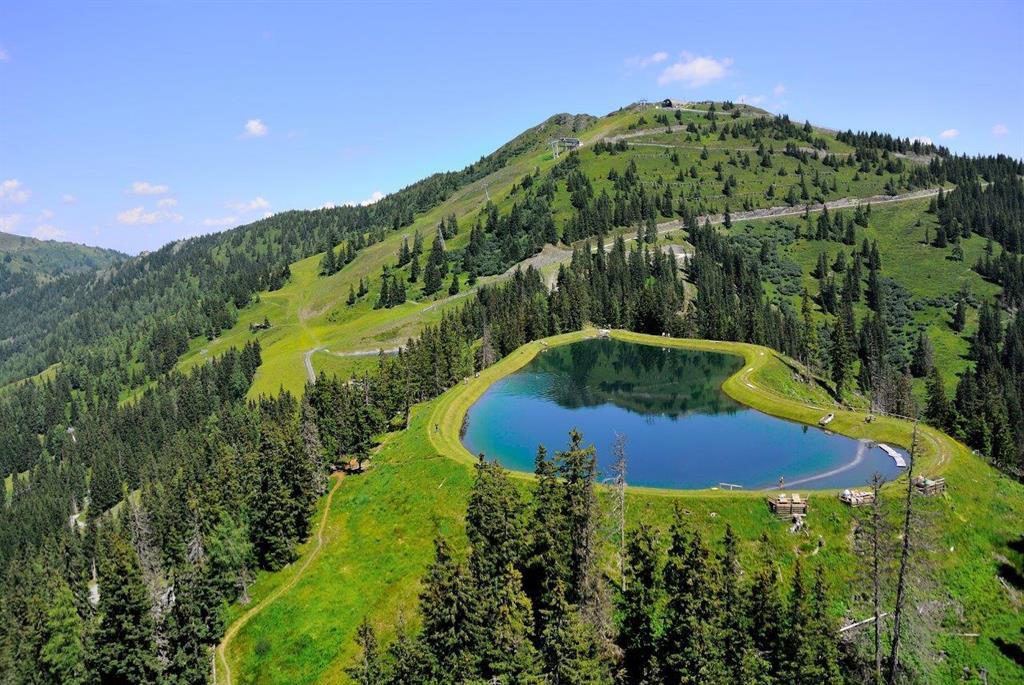 A barefoot walk along the beautiful Spiegelsee lake (or Mirror Lake) where the part of the bottom of the lake is adapted to walk for a refreshing massage, is in on our list for next time along with a stay in the area of Badgastein, Dorfgastein or Hofgastein. 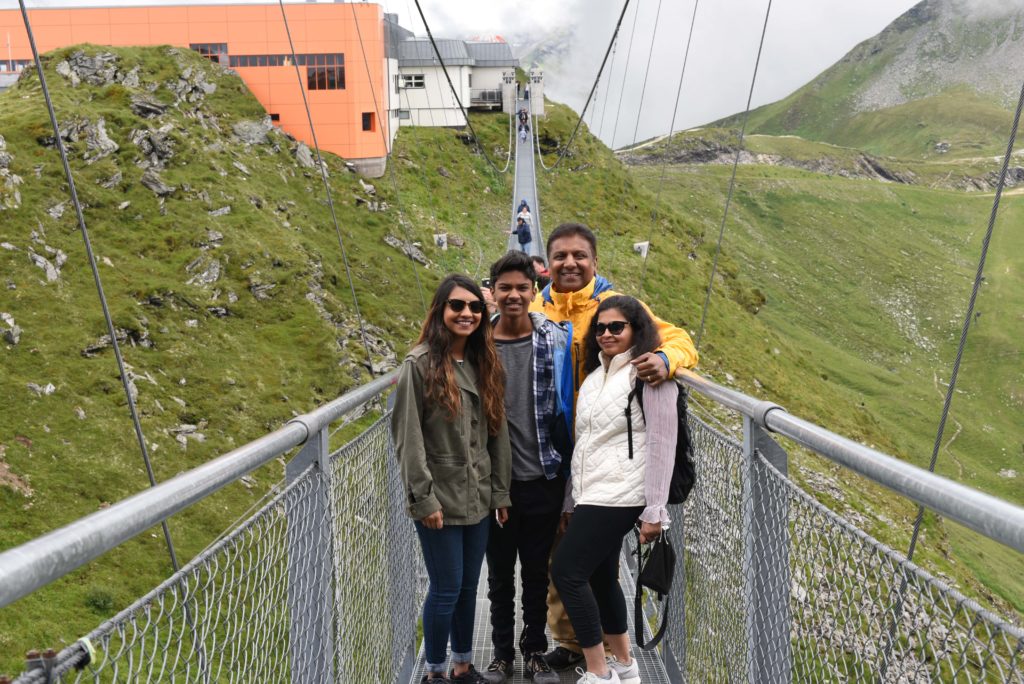 More Information on how to get to Stubnerkogel suspension bridge 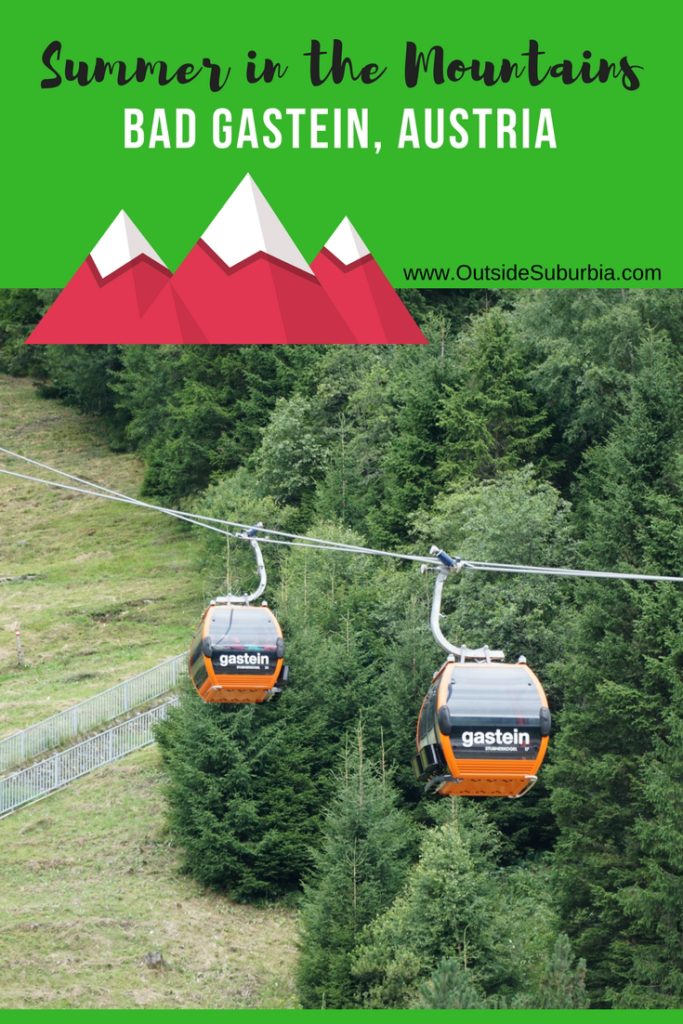 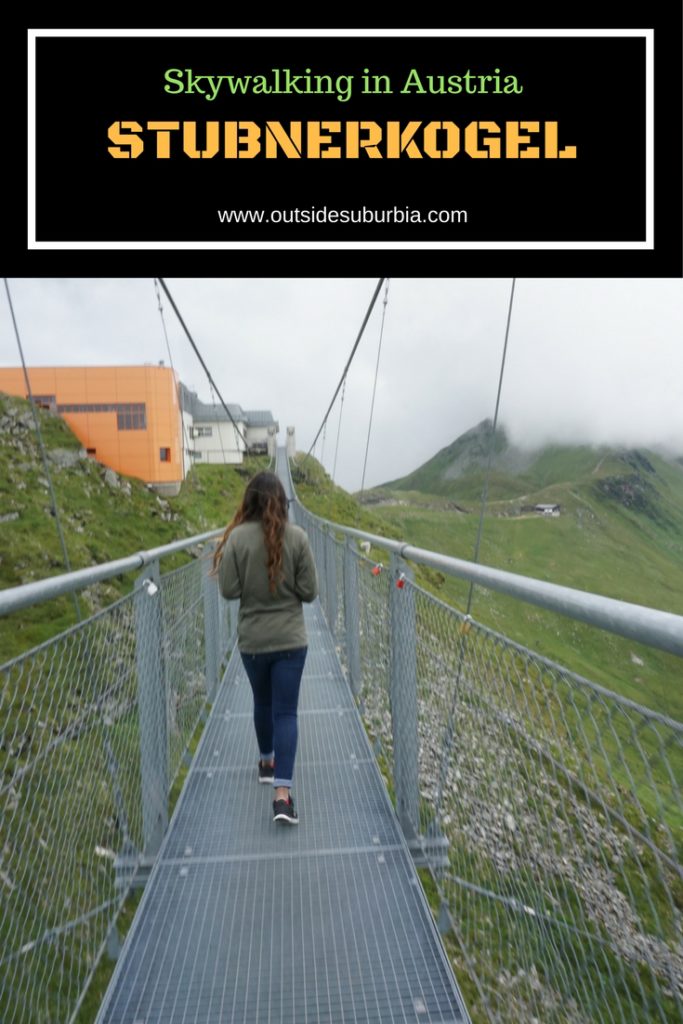 Have you been to Austria? Do you have any favorite cities or mountains that you have visited or is on your wishlist to visit in Austria?

7 thoughts on “Stubnerkogel : Walking on the highest suspension bridge in Austria”

Hi I'm Priya!  I'm always trying to escape the Suburbs to find cool places, nice hotels, modern art, soft adventures and hot air balloon rides... I strongly believe that you can have authentic and awesome experiences when travelling with kids and don't have END_OF_DOCUMENT_TOKEN_TO_BE_REPLACED