Over the Thanksgiving break we were in the San Francisco area visiting family.  We didn’t have a big itinerary planned but visiting the iconic Golden gate bridge was high on our list.  There are a few bridges as unique as the Golden Gate bridge which by the way is named not for its color, but for its location. It’s built above the Golden Gate Strait, the entrance to the San Francisco Bay from the Pacific Ocean. 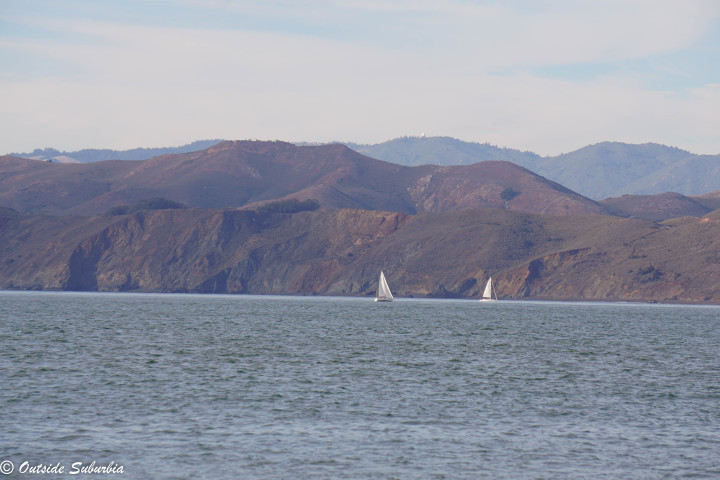 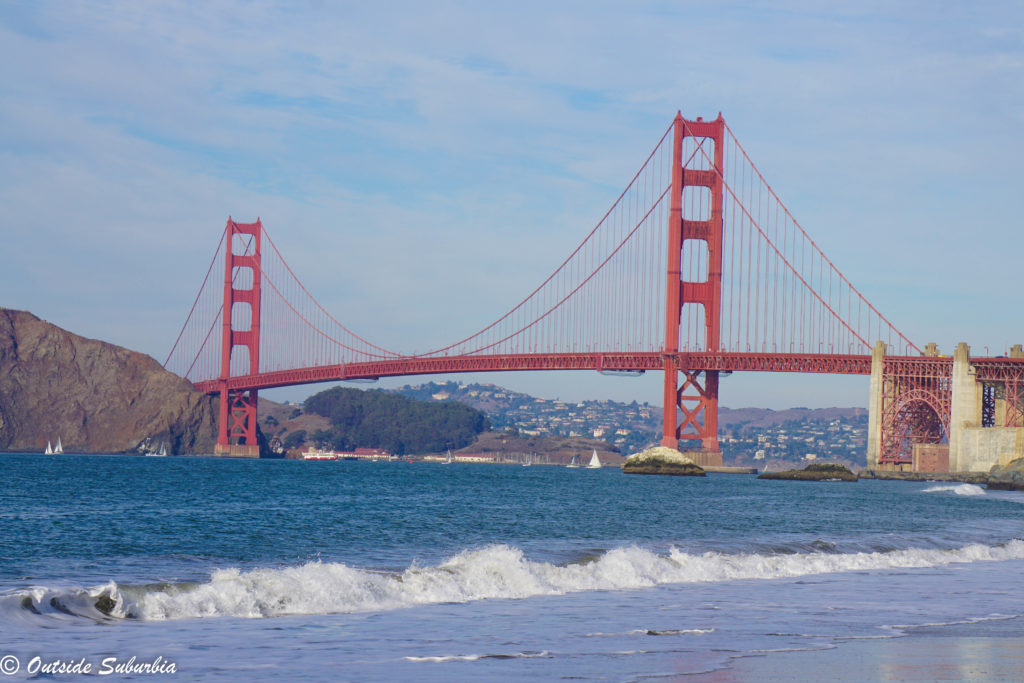 The bridge is painted a color which is called International Orange, came about thanks to Irving Morrow, the Golden Gate’s consulting architect, who noticed the striking reddish-orange primer painted on some of the steel. Morrow designed the bridge’s lighting and its art-deco styling. He also rooted for the unusual color. Most bridges were gray, silver or black. It was expected that the Golden Gate Bridge would follow suit.

Morrow had to convince the Department of War, the permitting agency at the time, that the largest suspension span ever built at the time should have this wild crazy color. “The Golden Gate Bridge,” Morrow wrote, “is one of the greatest monuments of all time. Its unprecedented size and scale, along with its grace of form and independence of conception, all call for unique and unconventional treatment from every point of view. What has been thus played up in form should not be let down in color.” The primer would need some added tones, but Morrow felt it was an ideal complement to the gray fog, the golden and green hills, the blue water and sky. 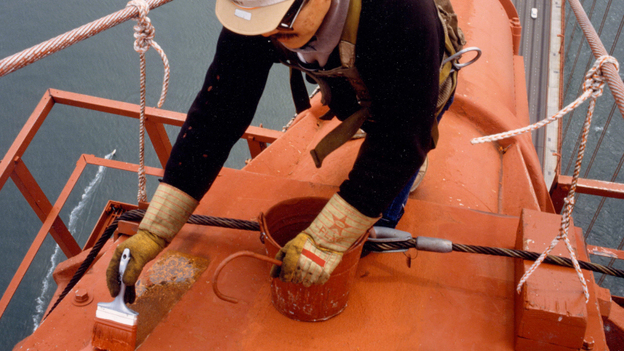 A painter touches up one of the bridge’s cables using its iconic color –  International Orange (Image by – goldengatebridge.org)

There are more than 10 million square feet of steel to paint on the bridge. It’s constantly touched up, not just to keep up the color but to protect it from the salty weather. One of the big myths is that the bridge is painted from one end to the other rather than continually touched up. The truth is that the Bridge is painted continuously. Painting the Bridge is an ongoing task. Buckets of paint are stored in an underground bunker near the bridge.  If you want to paint your bike or room this vibrant orange you can find it here at the Golden gate bridge’s website.

The best “postcard” views are from above the bridge on the San Francisco side. Access it from the “Last SF Exit” off the approach road, or from Lincoln Avenue. The parking lot was so crowded and the selfie sticks were everywhere.  We managed to find a spot and enjoyed the view- the bay, city skyline, the trusses, beams, cables, the suspension bridge and admire the engineering marvel. You can see the bay bridge, the beautiful city skyline and the famous Alcatraz. We were lucky that the bridge was not covered by fog like it usually is, and were able to see boat crossing the bay and the towers of the suspension bridge. 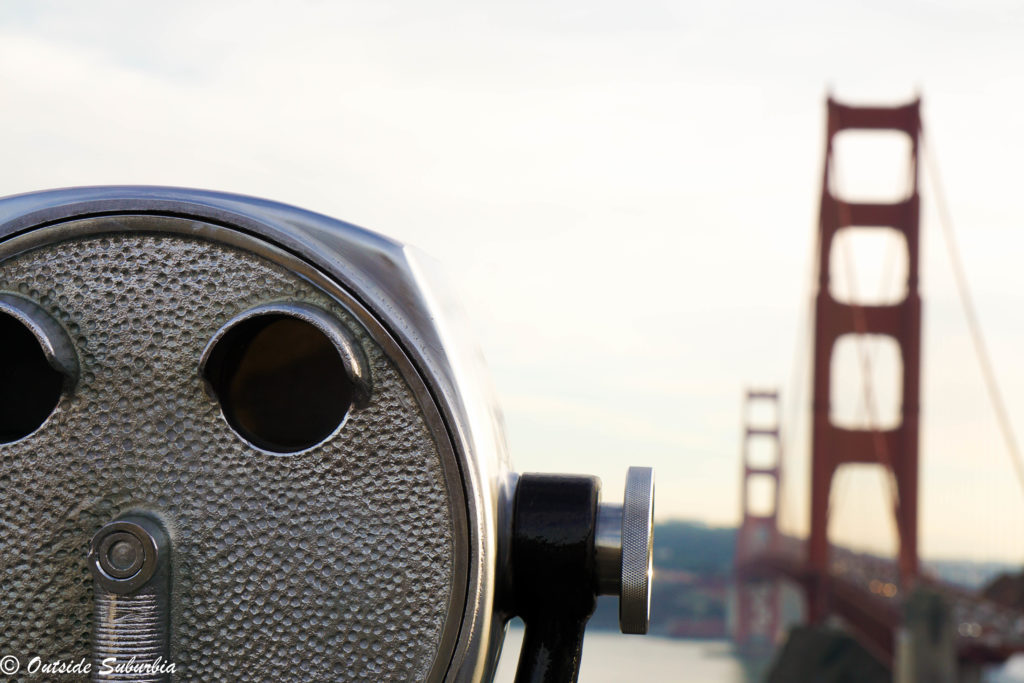 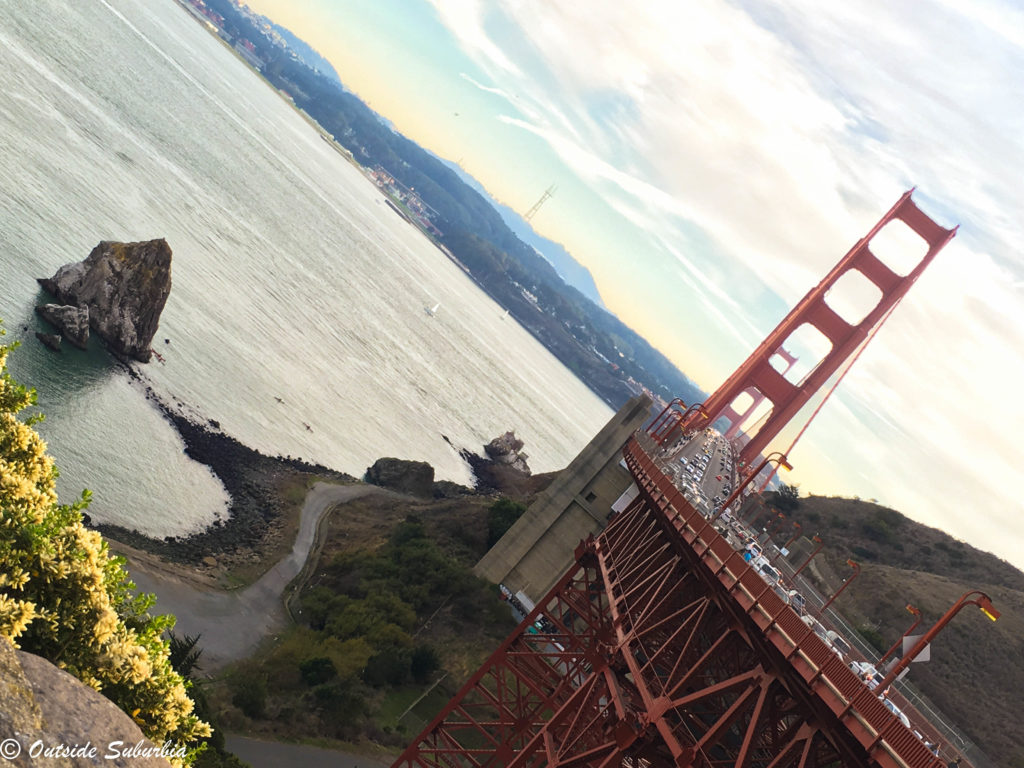 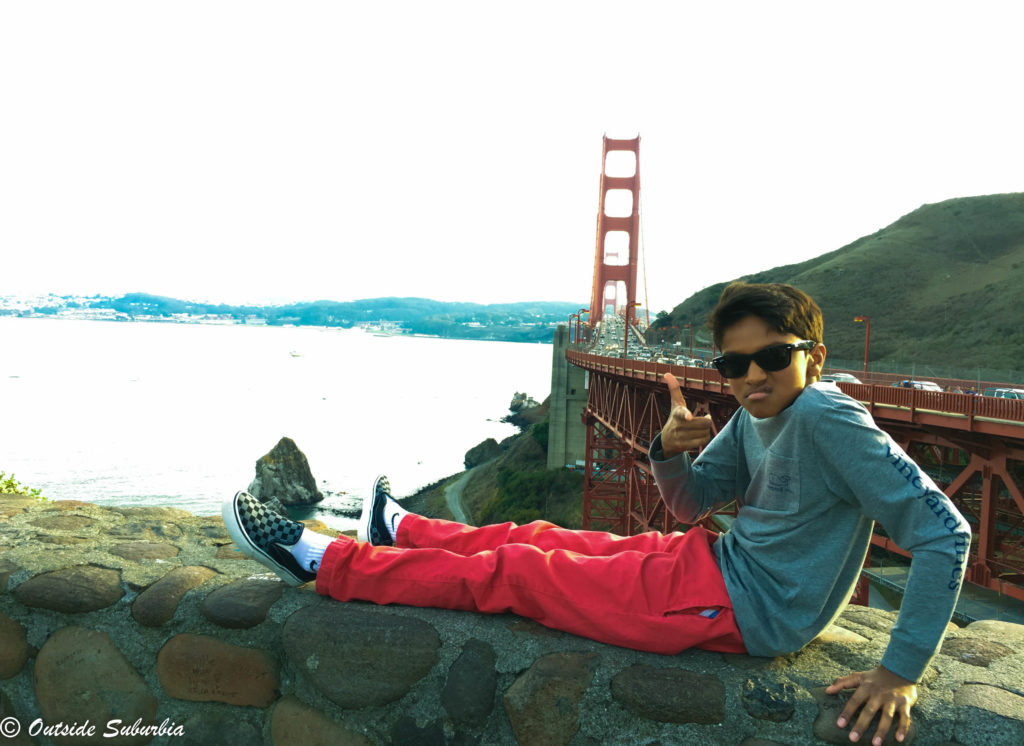 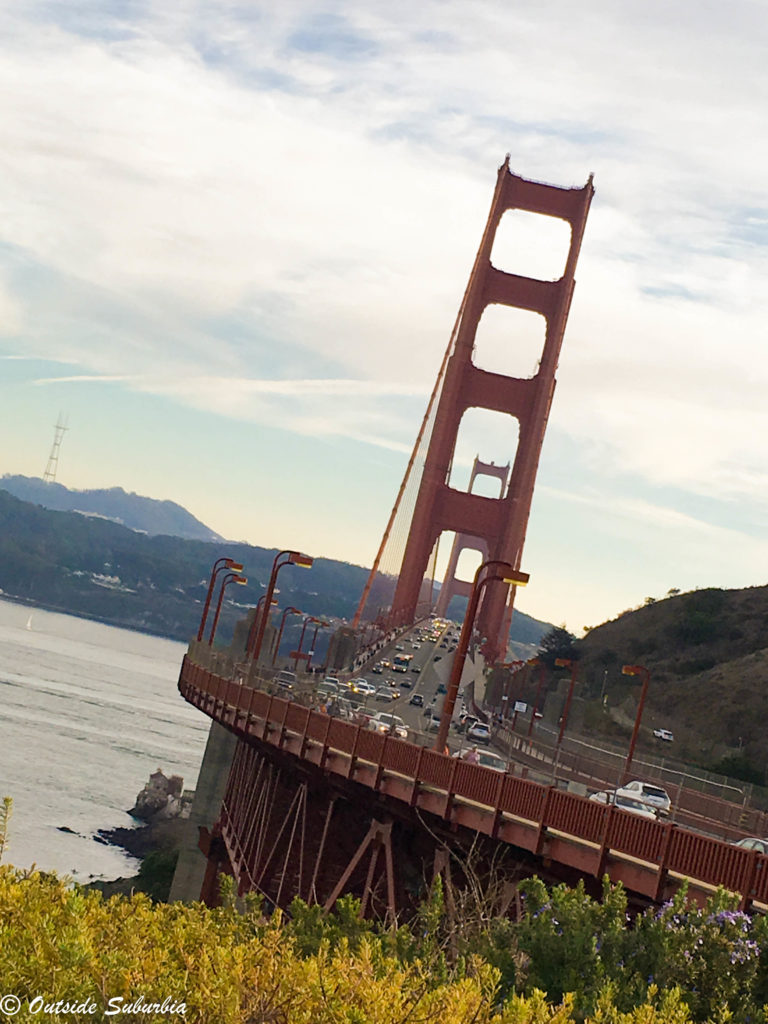 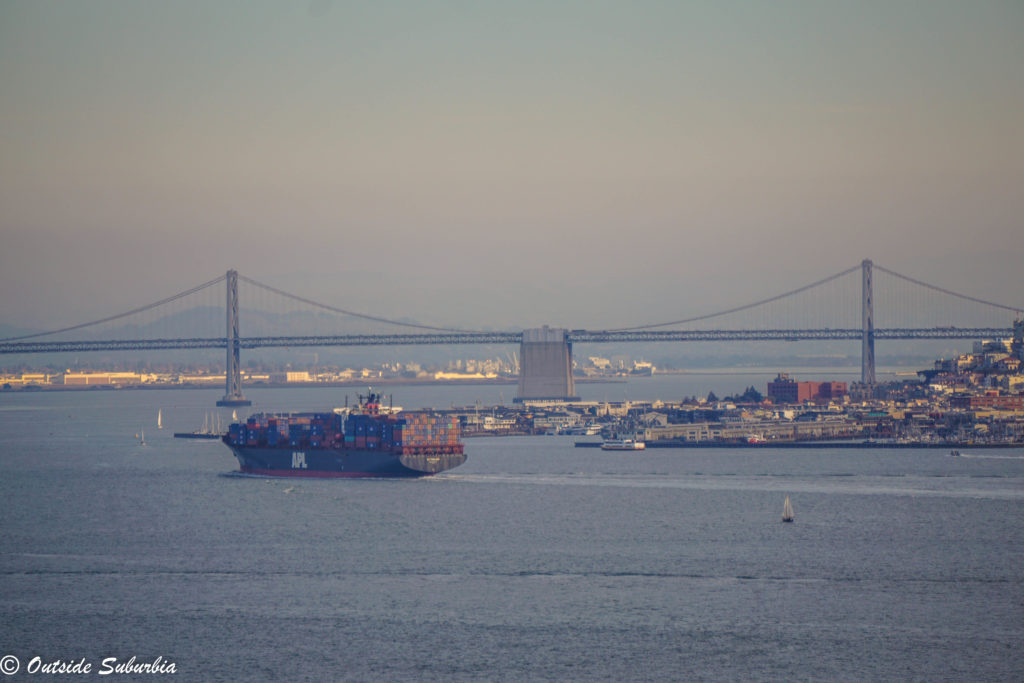 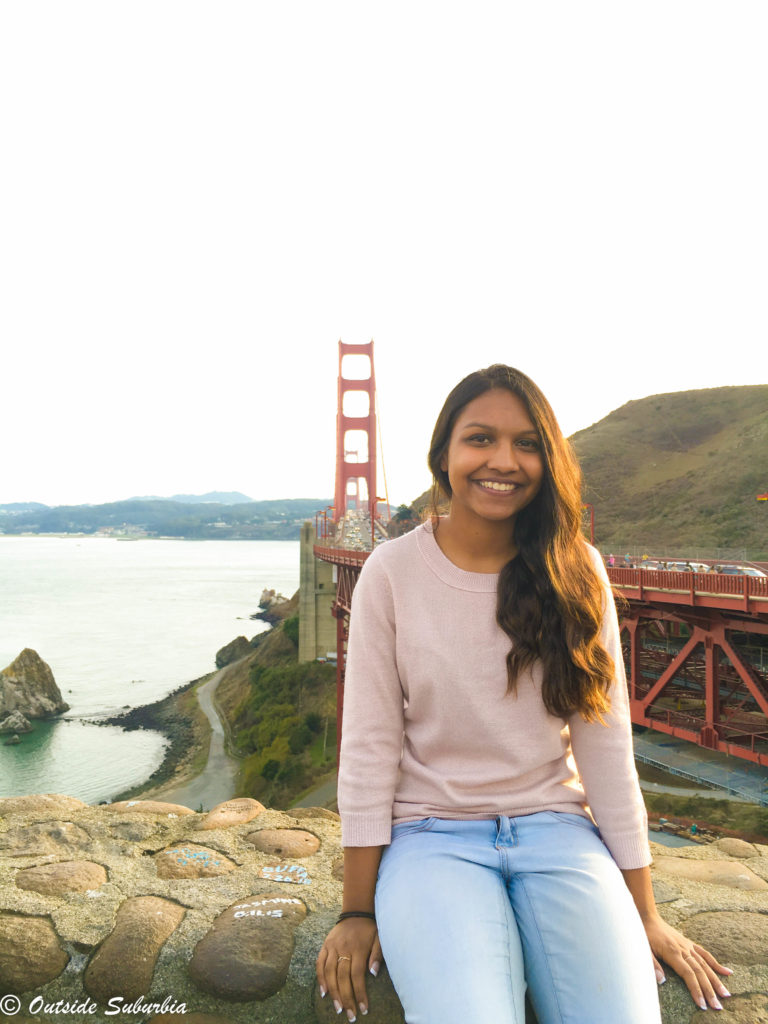 The historic fort at the base of the south end of the bridge is a good place for a long, low Golden Gate Bridge photo with the bridge receding into the distance.  We were short on time and skipped this one. You can see the beautiful trussed arch span over Fort Point from here. 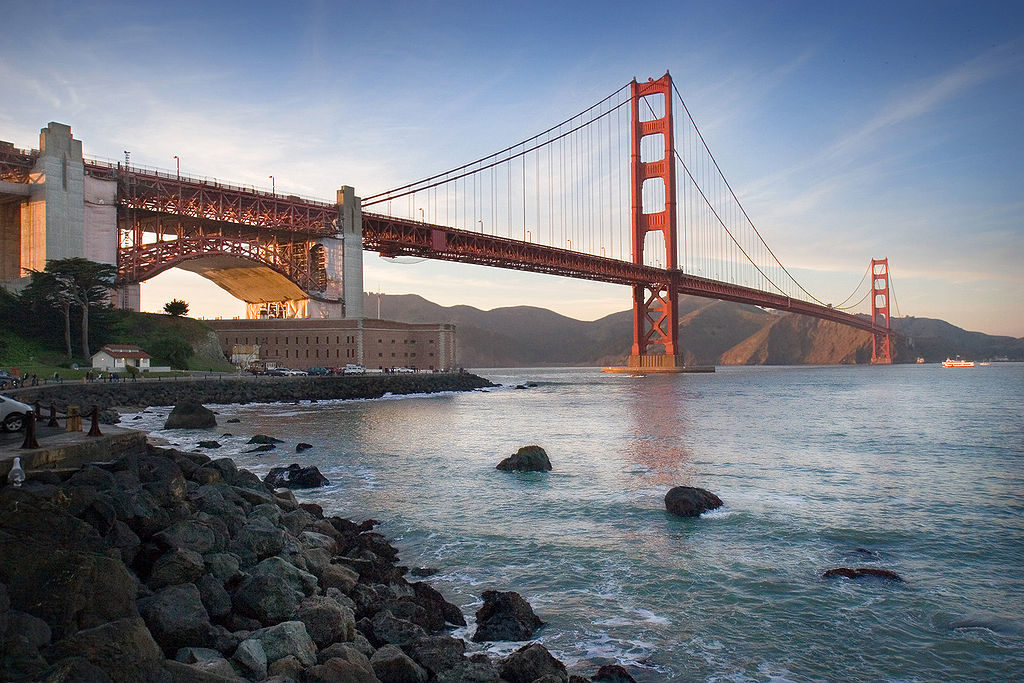 This is our favorite, a good place for a view and Golden Gate Bridge photo from water level, you can see the full span of the bridge and the mountains from there.  But be aware that part of Baker Beach is a nude beach. It is best in late afternoon.  We did see one man sunning sans clothing, we didn’t realize it was a nude beach luckily he kept his man parts away from view.  The kids got a chuckle out of it. We were there at the golden hour when the sun was starting to bid farewell. We spent the afternoon skipping stone in the beach and watching the sea gulls and dogs play before heading to Pier 39. 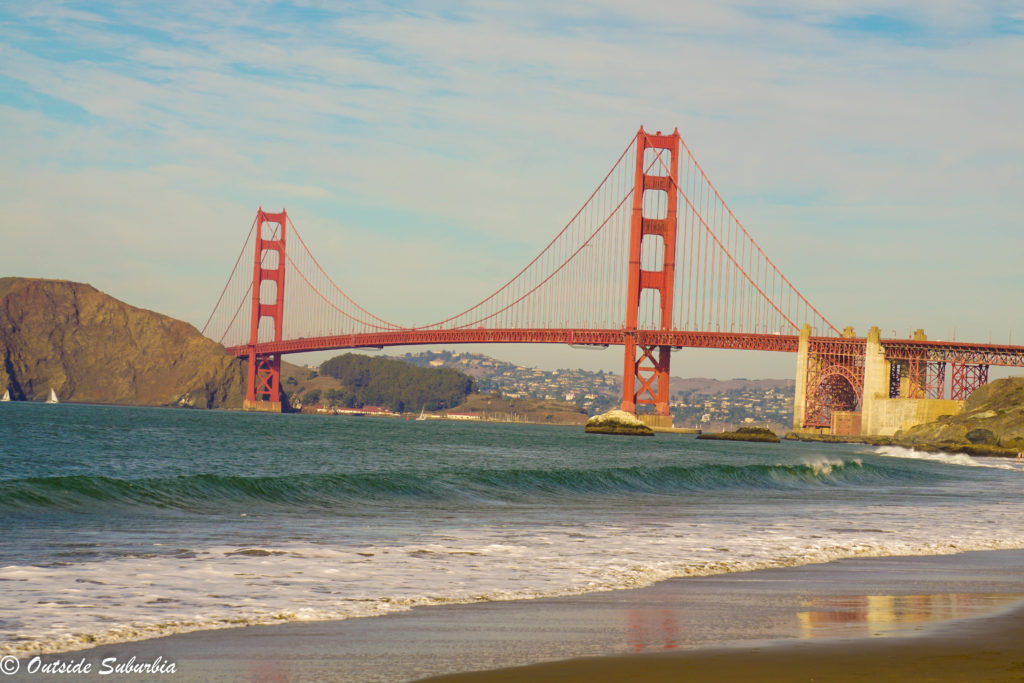 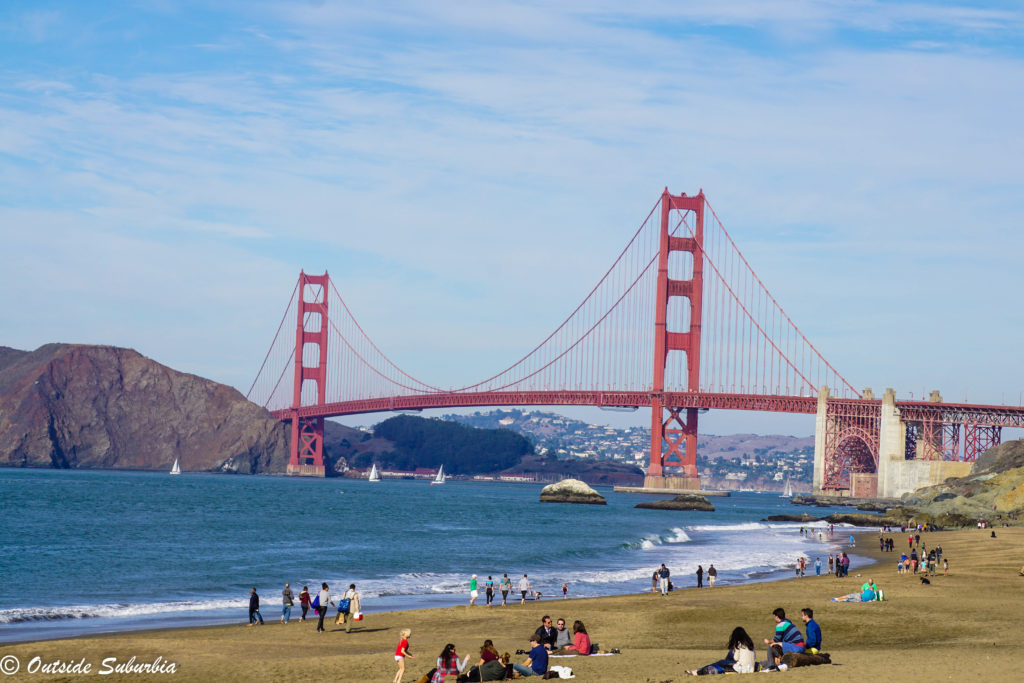 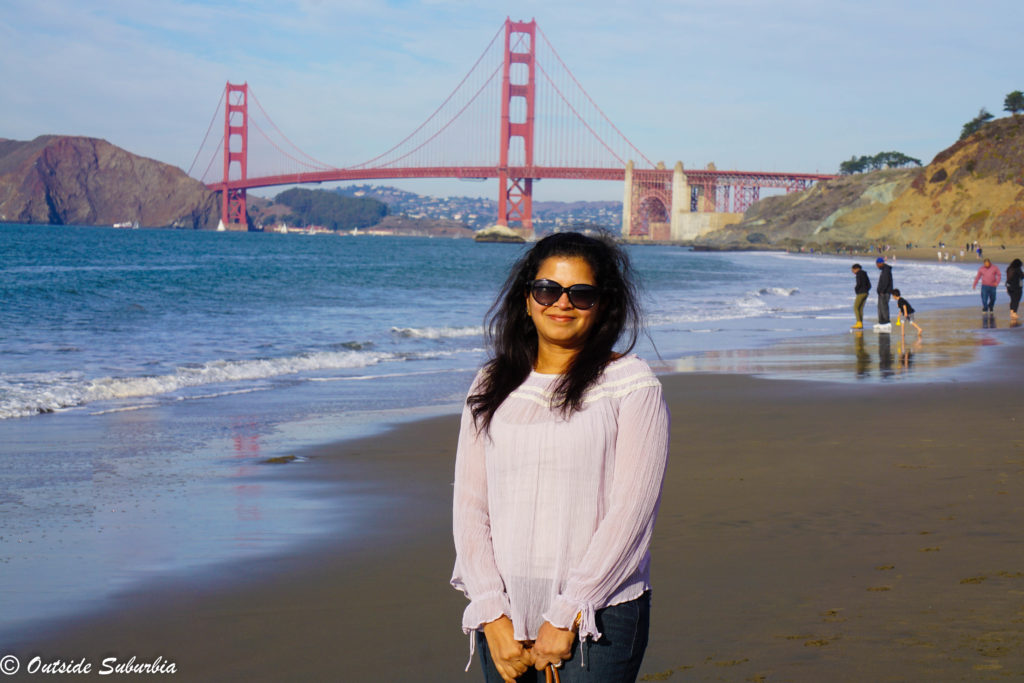 10 thoughts on “Postcards from the Golden Gate Bridge!”

Hi I'm Priya!  I'm always trying to escape the Suburbs to find cool places, nice hotels, modern art, soft adventures and hot air balloon rides... I strongly believe that you can have authentic and awesome experiences when travelling with kids and don't have END_OF_DOCUMENT_TOKEN_TO_BE_REPLACED