Road trips are synonyms with summer, it gets us Outside Suburbia, whether that is the outskirts of Dallas on the country roads or somewhere in Europe.  We have gotten lost in Andalusia before, went chasing after lavender in Provence one summer and drove around the ring round in Iceland last summer.  This summer we decided to visit the pristine Austrian and Swiss Alps and came up with a 2 week Austria & Switzerland road trip itinerary that covered the some of the best of Alps, at least for a first time trip… we are so enamored with this region: the mountains, the windy roads along the clear streams, the pretty villages on the foothills of gloriously green mountain ranges with window boxes covered with blooms. The grass on the Alps is a shade of green so pure and shimmers gold when the sun hits it, we were jealous of the cows and sheep grazing away happily with no care in the world.

We were driving from Ascona, Switzerland to Zermatt while D who was busy being our DJ for the trip, exclaimed “Dad we are in Italy” – we had no plans on driving through Italy! But sure enough, the unmanned border crossing sign confirmed we were driving through one of my favorite countries.  We had to stop for some Cappuccino and Gelato – because as you know – when in Italy you got to have some…  We scheduled two or three days in the mountains of Austria and Switzerland each, to simply enjoy the fresh air and the peaceful mountain scenery –  to maybe go on some hikes, have a picnic and enjoy the quiet and recharge our batteries.  Some cities we just stopped for a meal, if we had more time we could have easily spent days if not weeks in each location enjoying the local cuisine and getting lost in the small roads lined with cafes and sweet homes. We flew into Vienna where we picked up our BMW from Sixt Rent A Car.  We love Sixt (Save up to 10% on car rental in Europe

) because you can not only rent a luxury car, but you can rent it for almost the same price as economy cars.  Sixt has become one of our favorite car companies after we had rented a Cadillac on our recent trip to Napa. Sixt was originally started in Germany over 100 years ago and has recently made its launch in the US.  They now have over 4,000 locations in over 105 countries making it the largest premium rental car company! 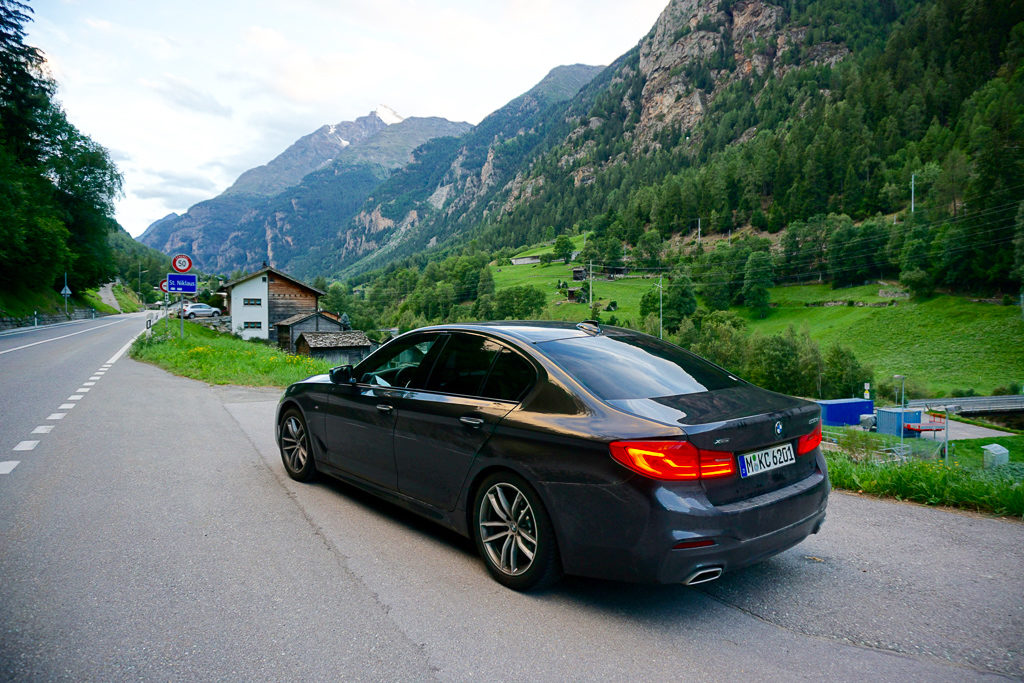 The 5 Series BMW we rented was fitted BMW Heads-Up Display that projects all information relevant to the journey directly into the driver’s field of vision, allowing to fully concentrate on driving. Mr. Suburbia mentioned a few times during the trip how the display included data such as the current speed, speed limit information including no-overtaking indicator along with information and warnings. The icons projected onto the windscreen were displayed in a high resolution and in full color making them easy to read.  The roads signs are not often in English, so you can easily miss exits, take the wrong one and getting lost – having the navigation system really helped.

We bought Vignette which is basically, a pre-paid toll sticker that is placed on the windscreen of the car. All of the freeways (autobahn), federal highways (Bundesstraße) and expressways (Schnellstraßen) in Austria are cashless and the stickers, called “Vignette” are required by all drivers in order to use the motorways.  You can buy these at the gas stations, some rental cars already come with them.  When we were near the Swiss border, we got Vignette for the Swiss motorways. The local police conduct regular checks on all vehicles and issue very expensive fines for cars not displaying a Vignette.

From Vienna to Geneva, here are the highlights of our Best of Alps road trip – we drove about 1500 kilometers… Mr. Suburbia did, I chalked up the route and navigated.

We flew into Vienna, spent a few days there, then rented a car and drove through the idyllic villages, bustling cities and some of Europe’s highest mountain ranges. When we reached Geneva, we dropped off the car spent a few days before flying back home.

Vienna, the capital city of Austria has a lot of history, music and great cafe culture.  See our 3 day itinerary where we saw a little bit of everything – exploring this culturally rich city, getting lost in mazes at palaces, listening to Mozart at the Golden Hall, admiring Klimt and eating all the Sacher Torte and Apple Strudel you can manage – all the top things to do in Vienna and the hotel where we stayed linked here. 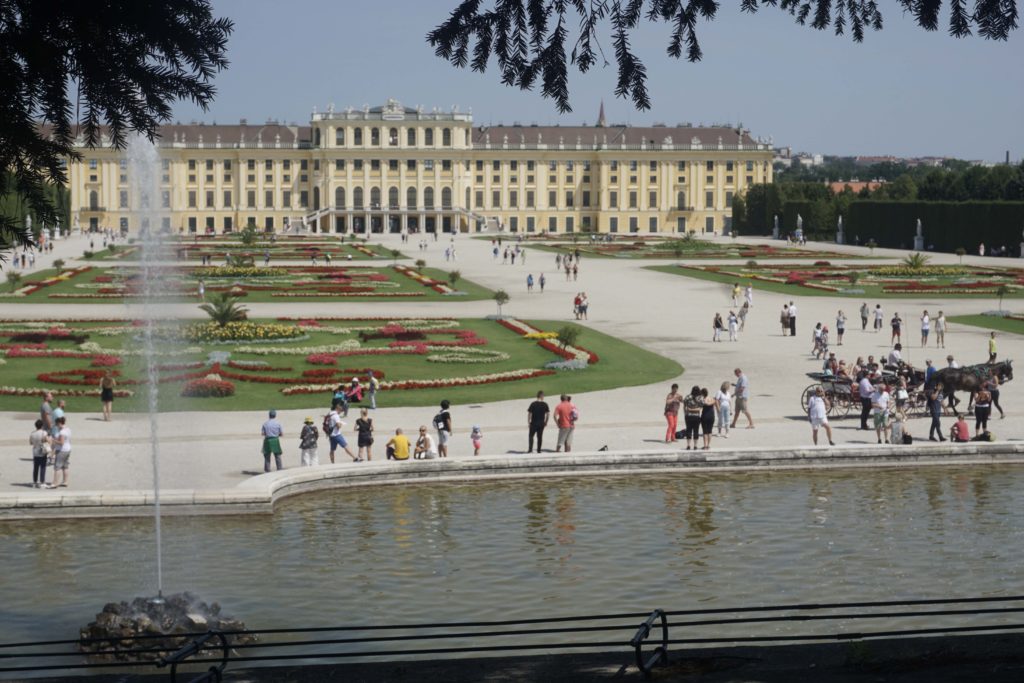 The bright yellow Melk Abbey sits majestically on a rock overlooking the Danube, in the Wachau region and is just a short drive one-hour drive from Vienna. Following the rules laid down by St. Benedict, Benedictine monks have been living and working in Melk Abbey.  When visiting the monastery you can see the Imperial Corridor, the Imperial Staircase, the Marble Hall with a beautiful ceiling fresco, the library that holds about 16,000 ancient books some of which are 500 years old, the abbey museum and the abbey church with its 200-foot-tall dome, gilded pulpits, and marble columns. There is also a lovely park with roses, a beautiful pavilion. 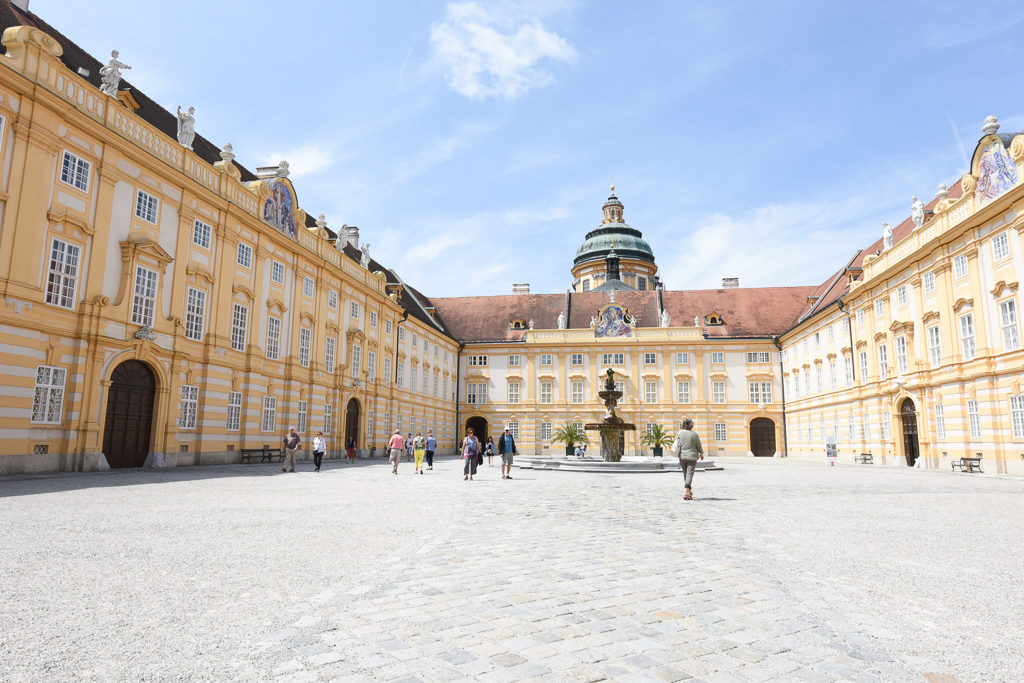 From Mozart to the popular movie “Sound of Music”, Salzburg is famous for many reasons. The city has many of Baroque churches, the stunning Hohensalzburg Castle, picturesque Mirabell Palace, and Gardens – you will recognize many famous Sound of Music’s scene here, including places where the song “Do Re Mi” was filmed. Mozart’s residence which has now been converted to a museum and has his original fortepiano is a must visit.  While the Old Town is known for its baroque architecture and breathtaking squares, palaces and gardens it is also a perfect base for some amazing road trips in Austria all within close distance from Salzburg. 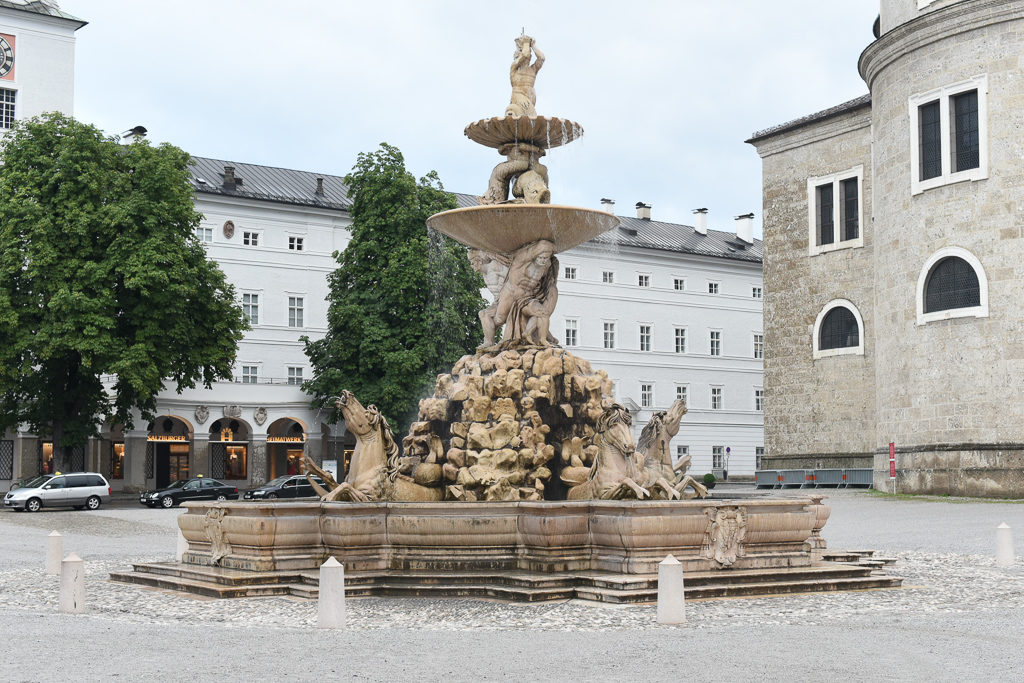 Also called Großglockner Hochalpenstraße, the drive that passes through the Hohe Tauern National Park is just stunning, with seemingly endless views over the range of 37 mountains as the road climbs to 2,504 meters. We drove from Salzburg to the start of the Grossglockner Hochalpenstrasse (at Bruck an der Grossglockner), the drive took about one and a half hours.  The Grossglockner Road is between  Fusch-Ferleiten in Salzburg to Heiligenblut in Carinthia.  We drove through a few tunnels dug through the mountains, passed Zell am See and a few other pretty villages along the way.  The drive over the Grossglockner can take an hour or more, depending on what you want to see and do along the way. See here for details about this High Alpine Road trip. 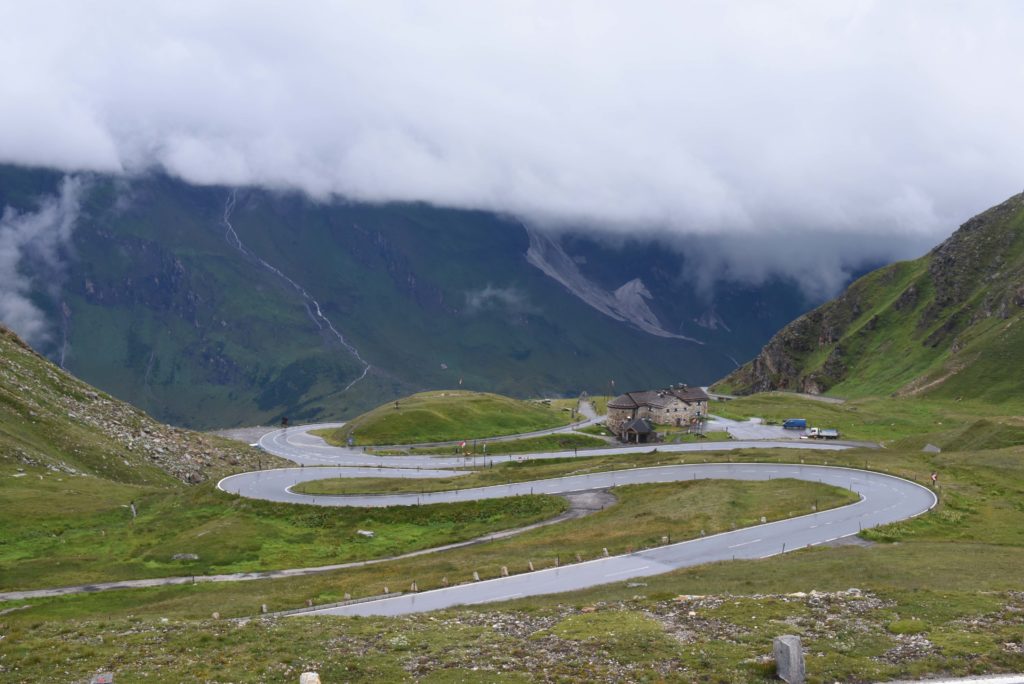 Did you know that the names of the city of Salzburg and the region of Salzkammergut come from Salt – which is one of the most important raw materials in Austria?  Dubbed as the “white gold”, it plays such an important part in the history of the region.   Hallstatt is more than a pretty lakeshore village although it has become a favorite destination for people(especially Photographers and Instagrammers) from all over because of its extremely striking position right on Lake Hallstatter. Home to less than 1000 people, Hallstatt has been inhabited for thousands of years because it has bountiful deposits of natural salt that people living there always mined. See more about the oldest salt mine visit here.

One of the most impressive lookout points in Hallstatt is from the patio of Rudolph’s Tower that that hangs over the cliffside.  The V-shaped walkway juts out 1148 feet directly above the roofs of Hallstatt’s village and promises a World Heritage View and delivers much more.  We walked up to the platform for some vertigo causing views of the lake, village, and surrounding mountains. 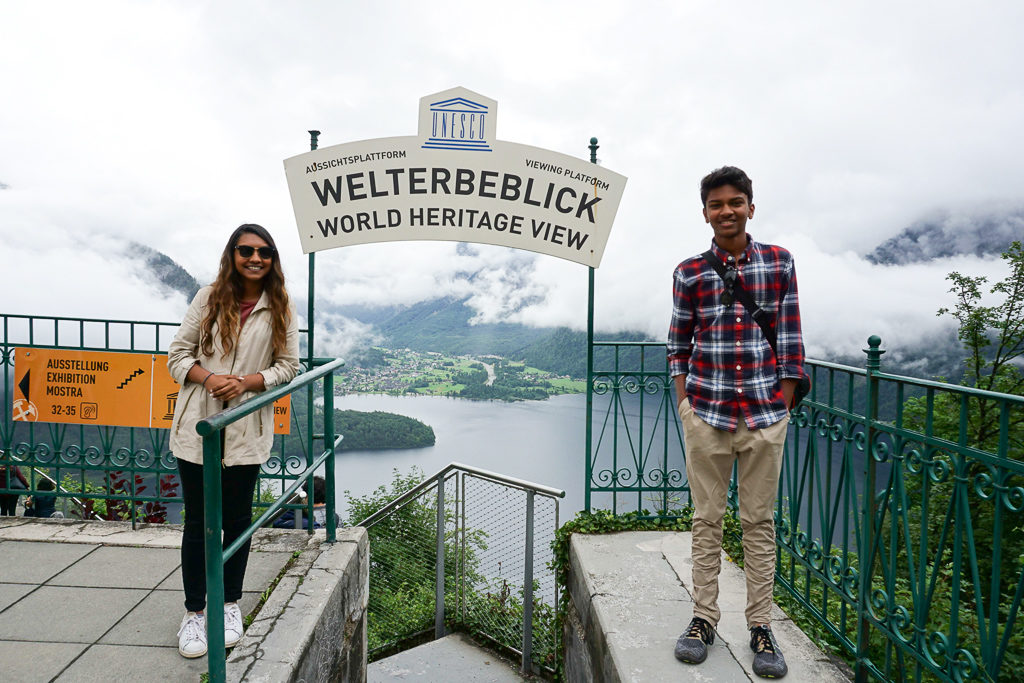 Innsbruck, the capital of Austria’s western state of Tyrol, is a city in the Alps and is a popular destination for winter sports. Innsbruck is also known for its Imperial and modern architecture, we especially loved the colorful row houses along the Inn River on Mariahilstraße. With the Inn River on one side and the Nordkette mountain towering behind, the Innsbruck old town is quite charming and very photogenic.  We spent some time walking on the Stubnerkogel, the highest suspension bridge in Austria located in Bad Gastein, an Austrian spa and ski town. 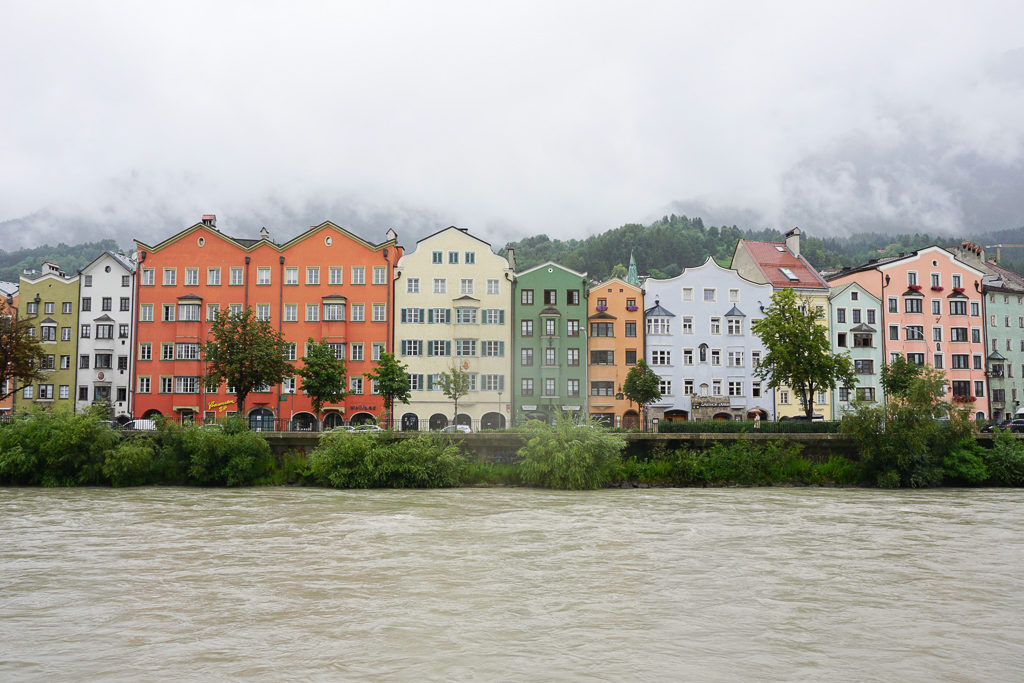 St. Moritz, the birthplace of Alpine winter tourism is a holiday resort town in Switzerland and seems like a well-kept secret. It has hosted the Winter Olympics twice and guests from all over the world visit here for the modern Alpine lifestyle and winter sporting opportunities.  But the area is perfect for summer activities as well. St Moritz has a bounty of summer attractions to keep you busy. Stroll around the lake, get lost in the views of the snow-specked mountains that surround the town, listen to the cowbells as they graze on the meadows filled with wildflowers, enjoy lunch at the alpine huts in the mountains after lovely hikes.  We loved our stay at Badrutt’s Palace Hotel, the kids still talk about the fondue meals, the Rolls Royce house cars, the incredible views! 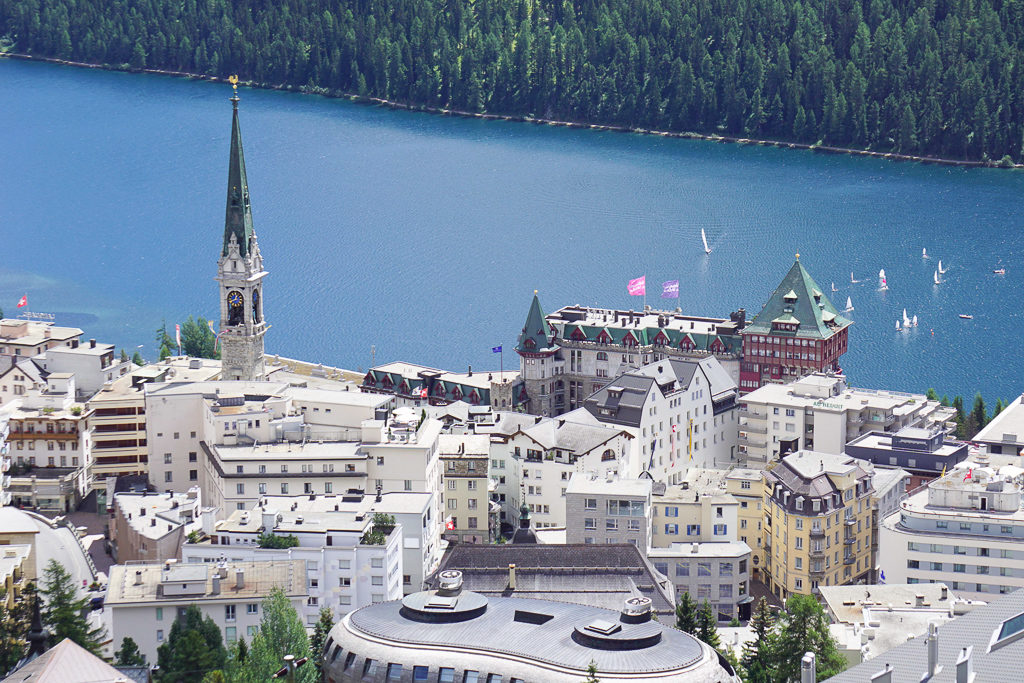 Ascona is Switzerland’s lowest lying town and is located at just 196 meters above sea level on the northern shore of Lago Maggiore, also called Lake Langen. Ascona is famous for its mild climate, its colorful Old Town and a lake promenade which is dotted with street cafés.  We made a quick stop for lunch before driving to Zermatt. 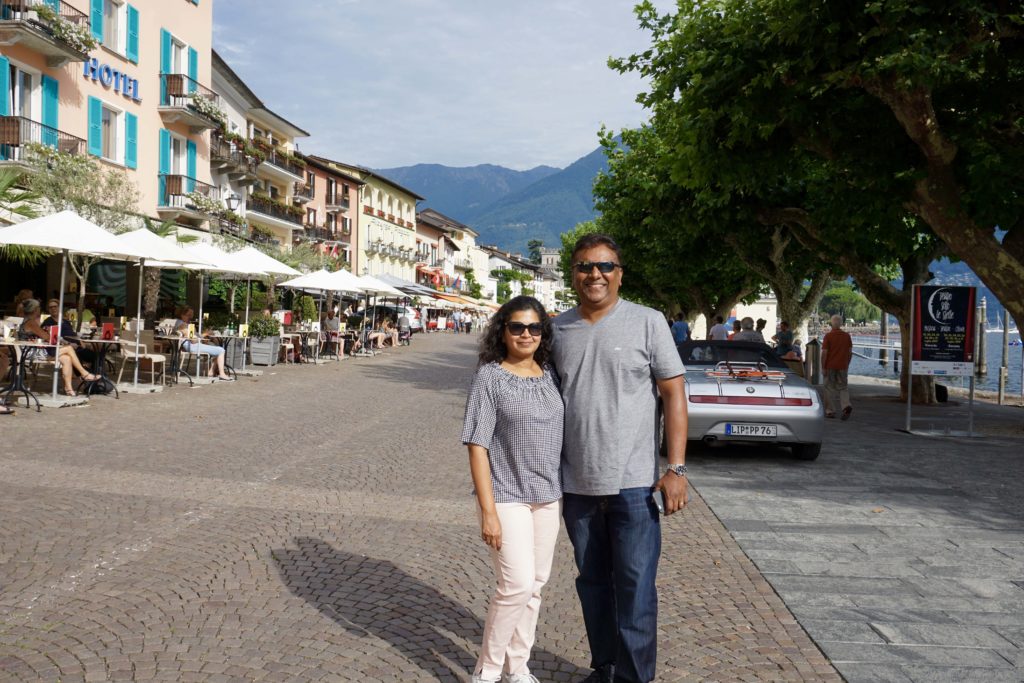 Somewhere along the Swiss Roads 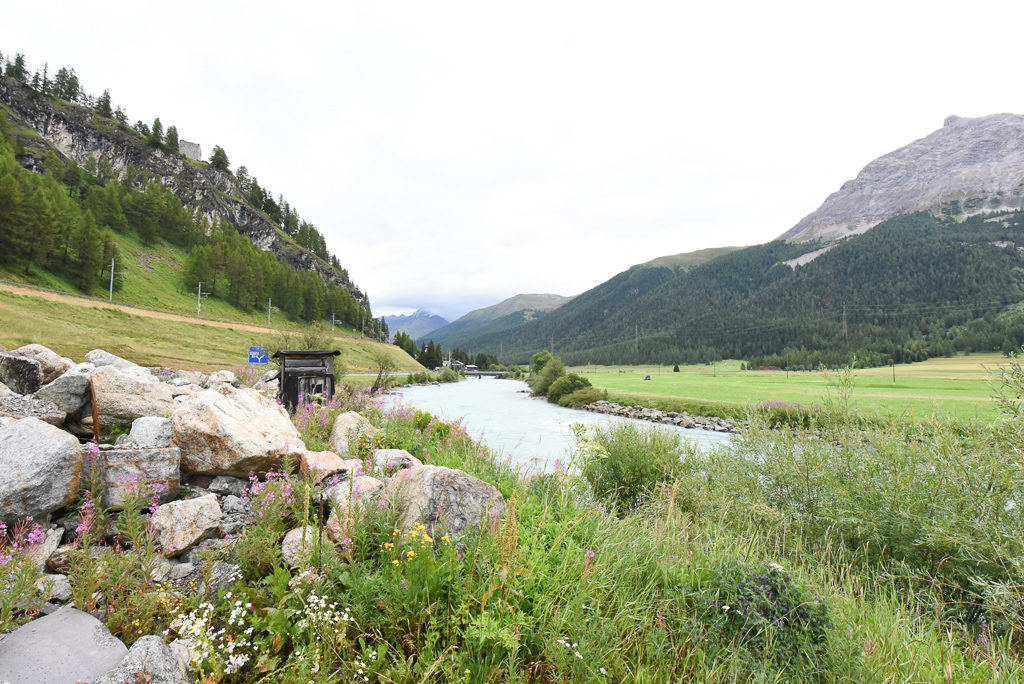 The car-free little town of Zermatt lies at the foot of the Matterhorn, probably the world’s most famous pyramid mountain. Walking, cycling, climbing,  paragliding and high-Alpine tours are popular activities in summer.  While the region is legendary among mountaineers, it has several family-friendly easy to do hike around the many meadows and crystal clear lakes.  More about it soon. 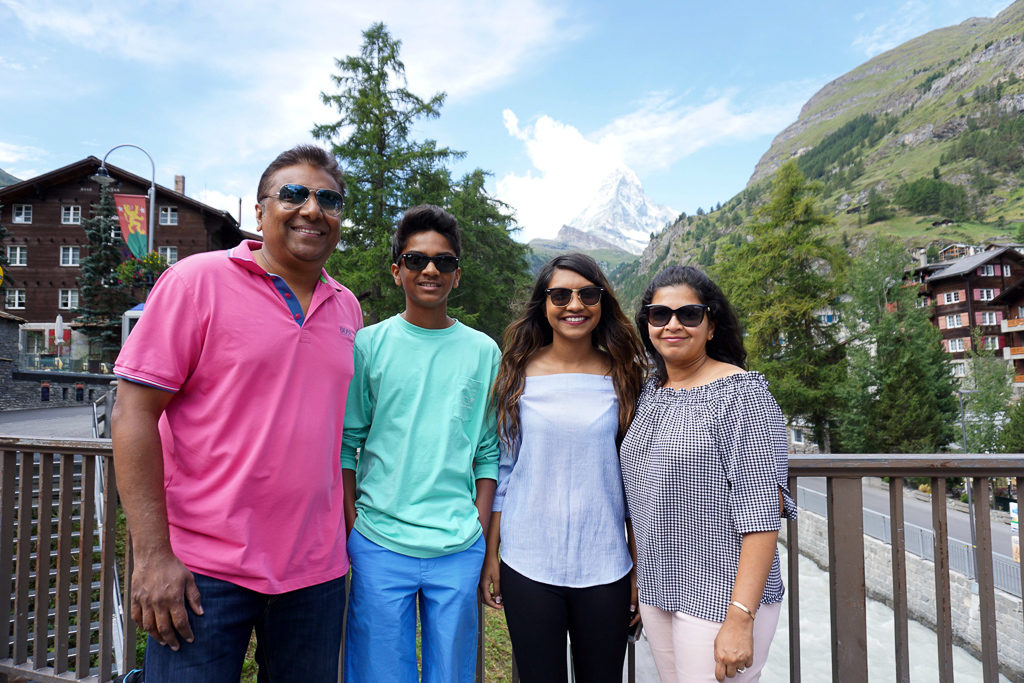 We made a quick stop on the shores of Lake Geneva, at Chillon Castle in the town of Montreux.  It was surrounded by vineyards and set against the breathtaking backdrop of the snow-covered Alps. If you have the luxury of time, plan for a couple of days here.  We didn’t and I still regret it! 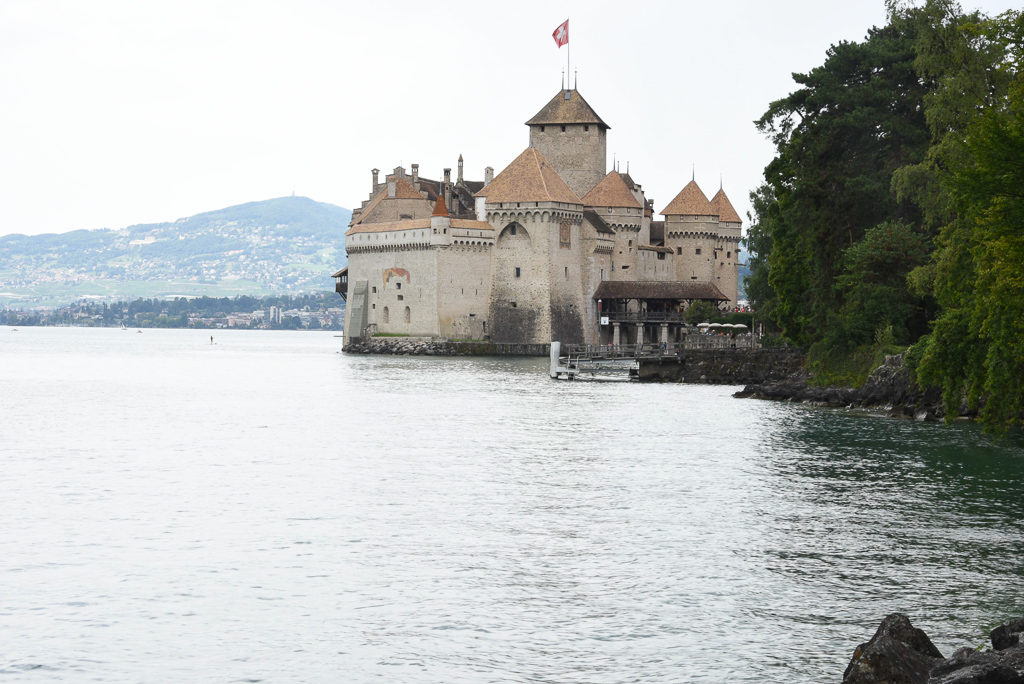 Geneva was our last stop on our Best of Alps road trip.  Geneva lies on the most southernmost tip of Lac Léman, the largest lake in Europe. The crescent-shaped lake also called Lake Geneva divides France and Switzerland. Geneva is the official city of peace and the home of the Palais des Nations, the United Nations in Geneva. It is home to the headquarters of 34 international organizations, such as the World Health Organisation, the World Trade Organisation and the International Committee of the Red Cross. It was also in Geneva where The world wide web (Internet) was first created —at the CERN (European Organization for Nuclear Research).  See here for our top things to do in Geneva. 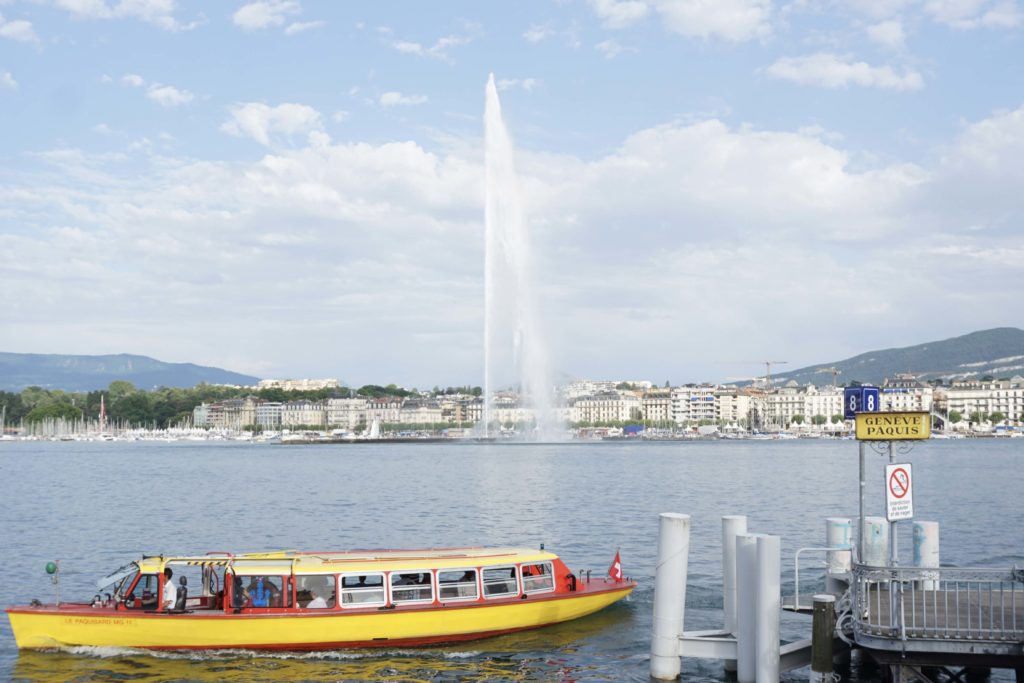 Have you visited the Alps, let us know some of your favorites cities – we would love to add them to our itinerary on our next visit.

You might also like – Texas Road trips, Sea to Sky Highway Road Trip in Vancouver, Easy Adventures and driving around the Ring Road in Iceland and other posts from Austria and Switzerland. 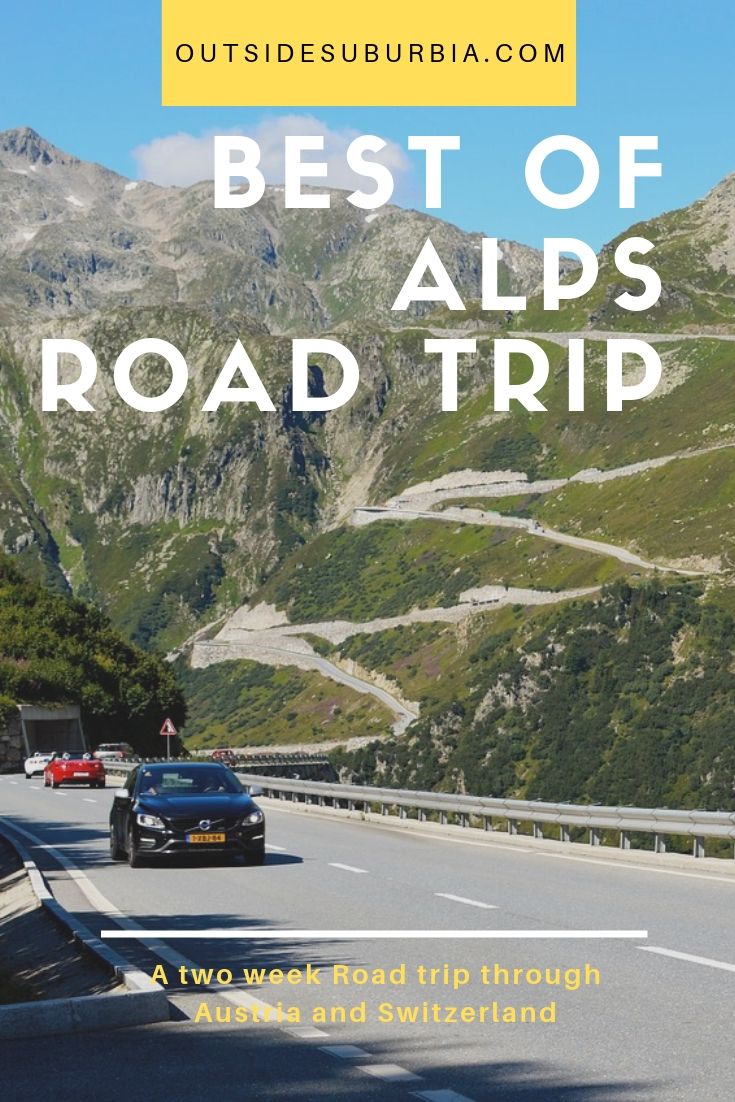